I so desperately want to believe that some meaningful action is going to come out of the IRS hearings on Capitol Hill.  My husband, Peace-Loving Warrior (PLW), keeps telling me not to get my hopes up.  He fears it's all for show to calm the American people down.
I must admit that there is no sign that Congress has the will to follow through on any kind of legal action.  Indeed, if I heard him correctly, Senator Rand Paul, admitted that while Congress holds the purse strings and could vote to cut funding to the IRS, the President has the ultimate authority to accept or veto such a move.  So, while I want to have confidence that our representatives in Congress will do the right thing by "we, the people", I'm afraid PLW might have the more accurate vision. 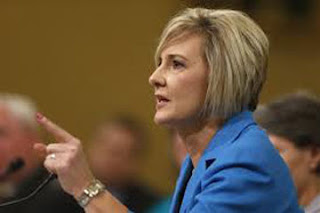 Regardless, I had to stand and cheer in my living room when I saw Becky Gerritso, President of the Wetumpka Tea Party of Alabama give one of the most honest and passionate speeches I have heard throughout this entire fiasco.  Like many of us, Becky and her husband had never become involved in politics, nor had they ever been interested in making their voices heard before 2008.  They had always considered themselves patriotic Americans, but when the government instituted the first $700 Billion bailout, they knew this great country was in trouble.  When an additional $787 Billion was spent just months later in January 2009, they were alarmed to find that the money went to foreign countries, failing banks and unproductive industries.
Like millions of us, they knew this was more than "deficit spending as usual".  The government was out of control, and if ordinary Americans didn't try to do something, that runaway train of spending was going to continue to build steam.  So they joined other concerned citizens across the country in an attempt to educate and empower Americans to get involved in our constitutional process of government.  The Wetumka Tea Party was born on April 15th, 2009, as were so many others throughout this land.  Non-partisan in nature; Republicans, Democrats and Independents showed up to express their feeling that their representative government had failed them.
Becky told the Congressional hearing that the Wetumka Tea Party is made up of patriotic Americans, who only wanted to peacefully assemble, petition their government, and exercise their right to free speech.  So why would the government (via the IRS) try to stop them?
And that's when her emotions threatened to engulf her.   It's as if she knew she was speaking for a nation, and her voice trembled; she was obviously close to tears.  But through the strength of her passion, Becky Gerritso gave what I think is one of the most memorable speeches I have ever heard:


“I’m not here as a serf or a vassal.  I’m not begging my lords for mercy. I’m a born-free American woman, wife, mother, and citizen. And I’m telling my government that you’ve forgotten your place.
It’s not your responsibility to look out for my well being and to monitor my speech. It’s not your right to assert an agenda. The post that you occupy exists to preserve American liberty. You’ve sworn to perform that duty and you have faltered.”

In one brief moment, Becky Gerritso expressed the spirit of America.  She spoke without rancor or deception.  She accurately portrayed the duty and responsibility of our federal government ... and she told them the unequivocal truth --- they've failed.  But she also stated a fact that I hope struck the hearts of every Congressman at that hearing.  We are not your servants or your slaves; we do not bow down to you.  We are born free through the grace of God, and this country exists because He ordained it.  Furthermore, the positions these Congressmen occupy are at the behest of a free people, and their role is to preserve the freedom and liberty God has lent us.  Because He gave us this land, it is within His authority to take it away.
Becky expressed it better than I can, and she may never know how many, just like me, stood and cheered when we heard her tear-choked speech.  That same spirit is alive in millions of men and women, and I pray to God that He will help us preserve this land we love.

Ecclesiastes 10:4     "If the anger of the ruler rises against you, do not leave your place, for calmness will lay great offenses to rest."
Posted by Pam Kohler at 7:00 AM