Pay Attention To The Words!

At a town hall meeting in Belfast, Ireland last week, the President of the United States made what I thought was a strange comparison.  He equated religious schools with the issue of segregation.  Just how did he come up with that analogy, you might ask?  In his mind, religious schools, such as those of the Catholic and Protestant persuasion in Ireland, are much like the school segregation policies over 50 years ago in the American South.  During that time period, black students were educated in separate schools and forced to use separate facilities.  And both systems, Mr. Obama asserts, causes division.
"If towns remain divided--if Catholics have their schools and buildings, and Protestants have theirs--if we can’t see ourselves in one another, if fear or resentment are allowed to harden, that encourages division. It discourages cooperation."  For him, it's all about peace .... and religious schools, just like segregation, don't promote peace (at least in his mind).  "Ultimately, peace is just not about politics," he said. "It’s about attitudes; about a sense of empathy; about breaking down the  divisions that we create for ourselves in our own minds and our own hearts that don’t exist in any objective reality, but that we carry with us generation after generation."
Now, I wholeheartedly agree that segregation was wrong; it was divisive and isolating.  But I sense something more than an appeal for "peace" in this kind of rhetoric.  There is an underlying connotation that religious schools -- and more pointedly -- the Christian faith are somehow at fault for promoting and encouraging the continuation of "unfairness" and "injustice".  It's really just the "social justice" argument wrapped up in new language.
It's no secret that the Administration is actively pursuing a regulation in the Affordable Health Care Act that would force Catholic individuals, business owners and institutions to provide health care plans that cover sterilizations, contraceptives and abortion-inducing drugs. The Catholic bishops of the United States have unanimously declared this regulation an "unjust and illegal mandate" that violates the constitutionally guaranteed right to free exercise of religion. 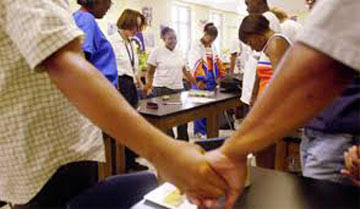 It's also no secret that private Christian religious schools, across all denominations, teach children reading, writing, arithmetic, history and other academic subjects, but also teach them the theology and moral views of their faith, and train their characters in keeping with those moral views.  I have personally seen the results of this kind of moral training in the character development of my nieces and nephews.  My oldest nephew, Matt, came home from attending third grade at his Catholic school, visibly upset over the poor treatment by fellow students of a young friend of a different race.  He struggled with what his proper reaction should be, and at the tender age of 8, he decided he had to call attention to the bullying and stand up for his friend.  This moral sense of right and wrong was a part of his everyday schooling, and now, I am proud to say that he still defends the citizens of his state and has risen through the ranks of the State Police to become a Special Investigator.  He still has a strong sense of right and wrong.
I have seen my nieces, who attended a private religious school, make some difficult decisions that resulted in them being ostracized and shunned by their peers because they did the right thing.  It is painful to observe their hurt feelings, but when asked if they would make the same decision again, they have agreed that one must always take the moral high ground and make those hard decisions.  And it is faith that helps you get through the backlash.
I guess I am simply offended that our President would use the abhorrent issues of slavery and segregation to insinuate that a religious education is a continuation of these divisive practices.  If you can paint a picture in people's minds using the evils of slavery, then connect the dots to a modern religious educational system, then I guess you can convince the sheeple that a religious education is as unfair, unjust and oppressive to a modern society.  After all, we are just trying to make everything equal, right?
So does it take much imagination to move to the next step?  If religious schools are somehow discriminatory by being divisive, then surely they should be outlawed, right?  Does anyone else besides me concede that this is a real possibility?  First, let's diminish morality by forcing religious institutions to go against their faith by adopting all the provisions and regulations in the new health care plan.  Once we've chipped away at those moral safeguards, then let's get rid of private, religious educational institutions.  After all, all kids should be taught the same thing, and the new Common Core standards will equalize the educational standards to reflect a more secular and godless society.  No more of these Christian kids setting a higher moral standard!  That's so divisive!
I know I sound cynical and derogatory.  But words have their consequences, and this speech made in Ireland last week has profound implications for the future of our educational system.  So be forewarned, and prepared, to defend the rights of parents and children who seek an education that is not only open to all, but provides valuable life lessons that will truly bring peace and unity to our society.

2 Corinthians 2:4-5       "... and my speech and my message were not in plausible words of wisdom, but in demonstration of the Spirit and of power, so that your faith might not rest in the wisdom of men but in the power of God."
Posted by Pam Kohler at 7:00 AM