Last week the families of Seal Team 6 gave an unprecedented press conference, in which they didn't pull any punches .... Larry Klayman, legal counsel for the families, released this statement:  [The press conference] will take on special significance given that our government has, over the last twelve years since September 11, committed brave American servicemen to wars in Iraq and Afghanistan which, in large part as a result of politics, were poorly conceived of and implemented, resulting in the deaths of thousands and the maiming of tens of thousands of our brave heroes. To make matters even worse, America has effectively lost these wars. 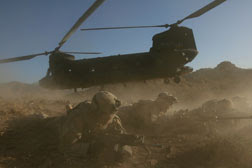 These charges stem from the August 6, 2011 Chinook crash, which is considered the worst loss of U.S. military life in Afghanistan.  The disaster killed all 38 people on board --- twenty-five Navy SEALs, five U.S. Army National Guard and Army Reserve crewmen, seven Afghan commandos, one Afghan interpreter, and a U.S. military dog.  The families have tried to get answers as to what happened in this incident, but have been stone-walled by a lack of investigation by either the Administration or Congress.  So they decided to take their concerns to the American people.  Not only do they deserve answers, but we do, too.
The families feel that there are too many unanswered questions about the event, and they are alleging that the government has some accountability in the tragedy.  Here are just a few of the questions that they feel they are justified in asking, and which, to date, they have received no reponse:
1)  Why did the Administration feel it was necessary to, in essence, "finger" the Navy SEALS as the personnel who carried out the attack on Osama Bin Laden's compound?  Why give that information to the enemy and put the SEALs and their families in jeopardy?  The families strongly feel that this "boasting" made it easy for the Taliban to target their sons.
2)   Why was there a sudden replacement of seven Afghan commandos on board the helicopter just before take-off?  And why were the seven Afghan commandos killed in the helicopter crash not the seven listed in the flight manifest?  To this day, none of the families know who those dead Afghans were.  Were the original seven properly vetted?  Did they possibly disclose classified information about the flight to the Taliban?
3)   Why were the SEALs transported by a Vietnam-era Chinook helicopter rather than their customary state-of-the-art special forces choppers?  And why were they reminded before landing not to clear the area of potential enemies with suppressing fire because there might be civilians in the area?  From my understanding, these are highly peculiar deviations from standard operating procedure.
4)  Why has the helicopter’s black box never been recovered?
These and many other unanswered questions have left the families feeling that the attack was carefully planned and not just a result of a random “lucky shot”, which has been the U.S. military's official line. 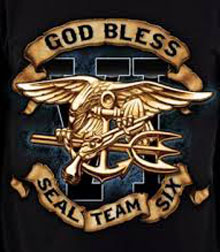 But for me, the most disturbing question concerns the burial ceremony.  Why was a Muslim cleric invited to the funeral service of these heroes and allowed to pray over the bodies of our fallen soldiers in Arabic?  According to the familys' attorney, "The funeral was held in Kabul where you couldn’t even mention the name of our Lord and Savior Jesus Christ and yet a Muslim cleric gets up and damns these fallen heroes to Hell as infidels....Is this part of the Administration's Muslim outreach?"  And in case you think I am exaggerating, here is the English interpretation of the prayer:


Amen. I shelter in allah from the devil who has been cast with stones.
In the name of allah the merciful forgiver.
The companions of “THE FIRE”
(The sinners and infidels who are fodder for the hell fire)
ARE NOT EQUAL WITH the companions of heaven.
The companions of heaven (Muslims) are the WINNERS.
Had he sent this Koran to the mountain, you would have seen the mountain prostrated in fear of allah.
(Mocking the GOD of Moses)
Such examples are what we present to the people, so that they would think.
(repent and convert to Islam)
Blessings are to your God (allah) the God of glory and what they describe.
And peace be upon the messengers (prophets) and thanks be to allah the lord of both universes (mankind and Jinn).”

I cannot imagine what pain this brings to the families of our slain to know that this was allowed.  But I pray that they receive comfort from knowing that our God is the sovereign ruler of the Universe and the One True God; the words of an imposter have no effect upon their souls and they are resting in the saving arms of Jesus Christ, their Lord.  And one day soon, He will judge those who would dishonor the memories of these brave men.  In addition, I hope the families know that the American people honor the lives of their loved ones, and we, too, want accountability in this matter.  We stand with them in their search for answers.  I hope they pursue this until they uncover ALL the lies and deceit!

Proverbs 6:16-19      There are six things that the Lord hates, seven that are an abomination to him: haughty eyes, a lying tongue, and hands that shed innocent blood, a heart that devises wicked plans, feet that make haste to run to evil, a false witness who breathes out lies, and one who sows discord among brothers.