By now we ought to be used to the Power Machine in D.C. slipping unfavorable laws under our noses.  So it should come as no surprise that H.R. 933, or as it is known in the official Congressional record, "Consolidated and Further Continuing Appropriations Act, 2013", was signed into law last week with little fanfare.  This resolution, in effect, averted yet another government shutdown. 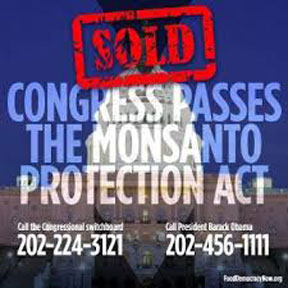 But this is what you really need to know:  buried within the law is a rider, known as Section 735, which was anonymously inserted as the bill made its way through the halls of Congress.  If you're interested in reading the legal mumbo jumbo, here it is:

"In the event that a determination of nonregulated status made pursuant to section 411 of Plant Protection Act is or has been invalidated or vacated, the secretary of agriculture shall, notwithstanding any other provision of law upon request by a farmer, grower, farm operator, or producer, immediately grant temporary permit(s) or temporary deregulation in part, subject to necessary and appropriate conditions consistent with section 411(a) or 412c of the Plant Protection Act, which interim conditions shall authorise the movement, introduction, continued cultivation, commercialisation and other specifically enumerated activities and requirements, including measures designed to mitigate or minimise potential adverse environmental effects, if any, relevant to the secretary's evaluation of the petition for nonregulated status, while ensuring that growers or other users are able to move, plant, cultivate, introduce into commerce and carry out other authorised activities in a time manner …"

Now, let me explain its significance, as I understand it.   Various food and consumer groups, as well as environmentalists, organic farmers, and Tea Party and Libertarian activists have joined together to express their concerns that this bill not only hijacks the Constitution, but sets a legal precedent and puts such companies as Monsanto and other biotech firms above the federal courts.  In other words, they say that not even the US government can now stop the sale, planting, harvest or distribution of any GM (Genetically Modified) seed, even if it is linked to illness or environmental problems.  It has all the earmarks of catering to a special interest group.  But, hey, that's never stopped anyone in Congress before, has it? 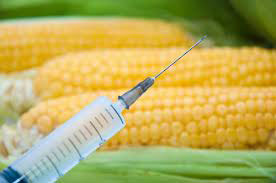 But here's the problem, for me:  Monsanto is clearly the largest manufacturer of Genetically modified organisms, or GMOs.  The jury is still out on the overall effects of these modified foods, but I think there's enough creditable data to worry about undiscovered health risks to humans, as well as the possibility of manmade genes "infecting", so to speak, the wild plants, potentially wreaking ecological havoc.  Supporters of the Monsanto Protection Act, (which of course tend to be the financial recipients of the GMO industry) prefer to call it the Farmer Assurance Provision, and they say it simply aims to prevent activists from using the court system to make farmers scrap or destroy their genetically modified crops.
Monsanto released a statement which read, in part, "As we understand it, the point of the Farmer Assurance Provision is to strike a careful balance allowing farmers to continue to plant and cultivate their crops subject to appropriate environmental safeguards, while USDA conducts any necessary further environmental reviews."  In other words, we are grateful to our government sponsors who found a way to introduce this legislation, which allows us to continue to experiment with genetically modified foods, make our money, and avoid any lawsuits until the USDA figures out if any of this stuff is dangerous.  At least, that's what I hear when I read between the lines.
Oh, and by the way, Republican Senator Roy Blunt of Missouri, told Politico he "worked with" Monsanto to secure the rider.  Interestingly enough, Blunt is Monsanto's chief recipient of political funds.  Nothing suspicious there, right?
And for those of you who still think that there is a semblance of justice in our nation's capitol, the "Monsanto Protection Act" is set to formally expire in September, since it is part of the much wider spending bill.  But, if you are cynical like me, then it has dawned on you that the precedent has been set.  And who among you thinks that it is ever likely that the world's largest seed company and the main driver of the controversial GM technology will ever agree to give up its new legal protection?  It appears to me that the seeds have already been sown and Monsanto will continue to grow and benefit from this divisive legislation.

Isaiah 61:11    "For as the soil makes the sprout come up and a garden causes seeds to grow, so the Sovereign Lord will make righteousness and praise spring up before all nations."
Posted by Pam Kohler at 7:00 AM