Note To Republicans: Take Me Off Your Call List

The Republican Party just doesn't get it.  They can send me all their carefully worded surveys, and call at odd hours, hoping that I will accidentally pick up the phone.  But I'm done with them!  Besides they're not really interested in what I have to say.  They end every mailing and every phone call, whether recorded or live, with the same petition .... please send more money!
What they don't understand is this:  I have seen no return for the money I've contributed in the past.  They have not supported the issues that are important to me, and furthermore, they keep nominating "politicians", who by their very definition are persons who act in a manipulative and devious way, typically to gain advancement within an organization. 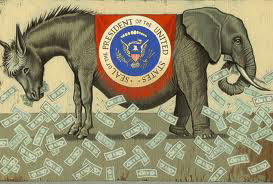 I'm weary of the same, tired rhetoric; and the promises of a "new direction" for the Party and the country.  From what I can see, your direction is the same as the other Party.  There is no real difference; one of you is just more obvious about the route you're taking.  In the end, we arrive at the same destination .... more entitlements, further in debt, higher taxes, less freedoms, and a comfortable retirement plan for you.
Meanwhile, what I see is a deliberate attempt to destroy more free-thinking political forums, such as the Tea Party or the Libertarian movement.  Mind you, I am not yet at the point that I think a third Party is a viable option; but there are millions of Americans who like what they hear in the small "g" government proposals of these other options.  When the establishment Republicans demonize them as "too far to the right", then I'm pretty sure they represent my views.
And when you try to take down a new member of Congress, elected by the people of Texas who were tired of the status quo, then you show your true colors.  The incident I am talking about happened during the Senate hearings on the Chuck Hagel nomination.  Unlike the robots that made malicious comments about this story on ThinkProgress.org, I see Freshman Senator Ted Cruz's challenges to Hagel as refreshing and absolutely within his parameters as a Senate Armed Services Committee member.
Instead of expecting Cruz to "remember his place" as so many of the commenters stated, I voted for him because he promised to go to Capitol Hill and represent me.  He asked the questions I wanted him to ask.  He asked about comments made, on the record, by Hagel that Israel's military campaign against the Lebanese militant group Hezbollah was a “sickening slaughter.”   “Does one typically characterize defending yourself against terrorism as a sickening slaughter?” Cruz asked.
Next, Cruz accused Hagel of broadcasting propaganda to countries hostile to the U.S.  “To explicitly agree with the characterization of the United States as the ‘world’s bully,’ I would suggest is not the conduct one would expect of a Secretary of Defense,” Cruz said.  He further questioned Hagel's refusal in providing the Committee with financial records that show who has paid him for speeches.  Considering the previous comments, which are not exactly complimentary of the U.S. and its Middle East ally, I do not think seeing his financial records is out of line. 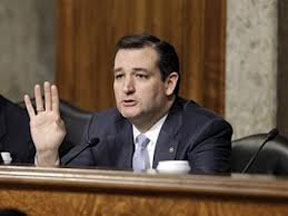 Yet the Old Guard of the Republican Party (read John McCain) sided with Democratic Committee member Bill Nelson in chastising Cruz for daring to question Hagel about the motivations behind his words and actions.  Nelson suggested that Cruz should have used former Committee Chairman McCain as a role model by "respecting the other person's motives."  I believe Senator Cruz, like so many other Americans, has had it up to here with giving passes to the peoples' representatives.  They work for us!  We have the right to question what their intentions are and what incentives they've been offered.
And if we still had any doubts that Capitol Hill needs to be swept clean of the "good ol' boy" network, Senator McCain joined in with Nelson to call Cruz on the carpet.  In essence, McCain threw Cruz to the lions when he adopted an imperial attitude and stated, "Hagel is an 'honorable man' whose ''character or his integrity" should be questioned by 'no one'."  If only more of our Congressmen's ethics and morality were questioned before they do more harm to the country!
By now, it is pretty apparent that there is a battle within the Republican Party.  The Establishment wing wants to continue to do "business as usual", which is destroying the middle class and taking this country down a path that belies our founding doctrine, the Constitution.  Whether the "new blood" can retain their souls and integrity while swimming with the sharks remains to be seen.  Will Senator Cruz remember why we sent him to Washington and honor his promises to his constituents?  Will he have the moral fiber to resist the temptation of Babylon-on-the-Potomac... or will he buy into the false idols of Power and Wealth?  Only time will tell.  In the meantime, I will be praying for him to remain true to his principles.  And I will continue to distrust the Republican Party and their false promises.
As far as "respecting another person's motives", Senator McCain, let me make mine perfectly clear:  it's to elect more Ted Cruz's and Rand Paul's who aren't afraid to stand up to the entrenched elite in D.C.  It's time we cleaned house!

Proverbs 11:3    "The integrity of the upright guides them, but the unfaithful are destroyed by their duplicity."