Imagine ... I Wonder If You Can

God sends me curious little messages from time to time.  This song has been looping through my brain all day, and so I figured I was supposed to take a closer look at it.  So I hope you will forgive me for presenting a post that might, at the outset, seem to have little merit.  But I think you will agree with my premise by the time you finish reading it.
I was a young elementary student when the Beatles burst upon the scene, so it almost feels sacrilegious to write this post, but the prophecies of one of John Lennon's most famous songs is about to be fulfilled.  And it is nothing to celebrate:

You, you may say
I'm a dreamer, but I'm not the only one
I hope some day you'll join us
And the world will be as one

Imagine no possessions
I wonder if you can
No need for greed or hunger
A brotherhood of man
Imagine all the people sharing all the world
You, you may say
I'm a dreamer, but I'm not the only one
I hope some day you'll join us
And the world will live as one 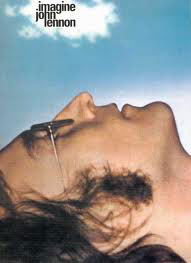 I was a starry-eyed, idealistic college freshman when this song took the youth of the world by storm. We were naive, inexperienced and easily-indoctrinated; eager for radical change to the established order, and the emotional plea of John Lennon's lyrics sucked us in.  I am older now, and the lyrics speak volumes about how God-less the world has become.
Now, I have seen attempts to present the "politically correct" version of the meaning of Imagine.  But I'm not as innocent as I once was.   In no way was Lennon trying to simulate (as I have seen someone write) the Sermon on the Mount.  That is outright laughable!  Imagine all the people living for today does not echo Consider the lilies of the field, how they grow; they toil not, neither do they spin.  Yes, you can find Scripture that extolls people living in peace, and sharing, and a brotherhood of man --- but that is not what Lennon was advocating.
In his own words, he told us what he meant the song to convey:  "[The song] says, 'Imagine that there was no more religion, no more country, no more politics,'; it is virtually the Communist manifesto, even though I'm not particularly a Communist and I do not belong to any movement." He told a British music publication: "There is no real Communist state in the world; you must realize that. The Socialism I speak about ... [is] not the way some daft Russian might do it, or the Chinese might do it. That might suit them. Us, we should have a nice ... British Socialism."
Ummm, John, I think history has proven you wrong.  Communism DOES exist, and Socialism never changes; it's the collective ownership of industry and business, with collective management of the economy, or more simply put ... a political and economic theory of social organization that advocates that the means of production, distribution, and exchange should be owned or regulated by the community as a whole.  When you combine Socialism with Communism, you get the Marxist theory of a transitional social state between the overthrow of capitalism and the realization of communism.  THAT is the world you describe:  no heaven, no countries, no religion, no possessions.
In one of his last interviews before he died, Lennon was a little more forthcoming about the meaning behind the song.  He said, "It's anti-religious, anti-nationalistic, anti-conventional, anti-capitalistic, but because it is sugarcoated it is accepted ... Now I understand what you have to do. Put your political message across with a little honey."
The message may be sugar-coated, but it's meaning is clear.  Those who would advocate a scenario in which "the world will be as one" or "the world will live as one", cannot have people imagining God or heaven.  That might lead to an understanding that individuals could have a relationship with a Power higher than the State, or themselves; that a person might have a purpose, and individual rights, and through the power and authority of God be able to accomplish living in peace, and sharing, and a brotherhood of man.
What John Lennon hoped the world would "imagine", sadly seems to be coming into view.  There are forces that are trying desperately to remove the hope of Heaven from the human spirit.  They wish to see borders eradicated, religion removed from society, and possessions re-distributed.  They want all the people sharing all the world.  At one time, they truly were "dreamers".  And it's frightening that they are "not the only ones".  They no longer "hope" you'll join them; they aim to make you join them. I'm not convinced that this is really what John Lennon saw in his utopian vision.  But like it or not, it is becoming our reality.  And, Johnny, I hate to tell you this, but the Bible predicted it long before you imagined it.