It's All About Guns

As was expected, this weekend's hot topic was guns and their place in American society.  From the Left, you had Senator Feinstein promising to introduce new legislation this week on an assault-weapons ban.  She was backed by Senators Durbin and Schumer.  On the other side of the aisle, you had Representative Gohmert commenting on why Americans could possibly need a semi-automatic weapon:  "Well, for the reason George Washington said: a free people should be an armed people. It ensures against the tyranny of the government, if they know that the biggest army is the American people."
Obviously, what I have to say doesn't matter one iota to them; they will do what they're going to do.... what they've been wanting to do as soon as a convenient incident presented itself.  Please do not think that I am minimizing the truly abhorrent killings that took place in Newtown.  This massacre is beyond nightmarish.  But as much as the anti-gun legislators and lobbyists would like us to believe, this event is not evidence of an out-of-control gun culture in America.  As my faithful reader, Lisa, commented on Saturday's post, "It's not the people with guns who are nuts; it's the nuts with guns that are causing these deaths." 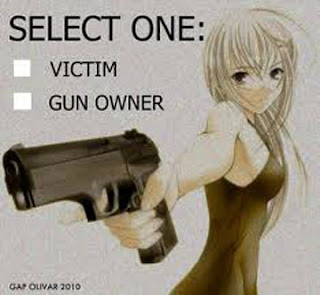 Stricter gun laws won't stop the killings.  When our own government institutes a program like "Fast and Furious", what makes the average citizen think they can introduce gun legislation that will keep us safe?  And it's not a uniquely "American" phenomenon.  If you need further evidence that more laws will not stop these kinds of killings, take a look at these statistics:
•  Gun crime was up 35 percent in the UK which has harsh gun control laws.  Thomas Hamilton killed 16 children in the Dunblane school massacre in 1996 using four handguns. Figures show the number of crimes involving handguns has more than doubled since the post-Dunblane massacre ban on the weapons, from 2,636 in 1997-1998 to the more recent 5,871. (Daniel Greenfield blog).
In a 2010 news article, author John Lott pointed out these facts:
•  Germany has strict licensing and registration requirements, yet they can claim 3 out of the 5 worst killing sprees in recent history; the other two being the above-mentioned Dunblane, Scotland attack and Columbine, in the U.S.
•  Lyon, France, March 19, 2009: ten people injured after a man opened fire on a nursery school.
•  Southern Finland, November 7, 2007: Seven students and the principal were killed at a high school.
•  Kauhajoki, Finland, Sept. 23, 2008: 10 people were shot to death at a college.
And let's not forget the 77 lives that were lost in the 2011 attack in Norway, which has strict gun control laws.  So no matter how much the American media would love for you to believe that it is only we Americans who have what they call "a sick obsession with guns", it is simply not true.  Indeed, the MSM needs to look to themselves and their complicity in propagating the legacies of these lunatics.
And I wish they would inform the public about countries like Israel and Switzerland.  According to Wikipedia, gun politics in Switzerland are unique in Europe. Switzerland does not have a standing army, instead opting for a peoples' militia for its national defence. The vast majority of men between the ages of 20 and 30 are conscripted into the militia and undergo military training, including weapons training. The personal weapons of the militia are kept at home as part of the military obligations; therefore Switzerland has one of the highest militia gun ownership rates in the world. In recent years, political opposition has expressed a desire for tighter gun regulations. A referendum in February 2011 rejected stricter gun control.  According to Snopes.com, Switzerland has the lowest gun-related crime rate in the civilized world.  Why isn't the media reporting that?
According to The Examiner.com, Israel and Thailand are countries where the threat of a school shooting is the highest. Sunni Jihadists have targeted young children for murder in these nations.  Israel once had a policy of victim disarmament. Israeli citizens were told they couldn't have guns. They were told the government would protect them. Then came numerous horrible massacres in the 1970's, and Israeli citizens rejected the idea that big government would protect them and demanded guns. Today Israel citizens enjoy Texan-style gun rights. Israeli citizens can lawfully use lethal force to protect both person and property with no "duty to flee." The country is much safer as a result.
Without meaning any insensitivity towards the Newport families, my very wise Sunday School teacher offered an astute observation .... "Our legislators seem to be on the brink of limiting the rights of 300,000,000 Americans because 26 people lost their lives to a madman."  Do those numbers make any sense to you?  And another member of my class relayed this experience:  He is a car salesman and reported that an unhappy customer showed up at a car dealership, which happened to encourage their salesmen to carry concealed.  When the customer pulled a gun and started waving it around, he was greeted with 5 pulled pistols and the command to "Drop the weapon!"  He quickly left the showroom and was arrested within minutes, a few blocks away.  No shots were fired and a potential killing spree was averted.
I know that no amount of logic or statistics will convince those whose agenda it is to rid this country of our Second Amendment rights.  I fear they will stop at nothing to accomplish their goal.  If innocent people have to die, then that's a cost they are willing to pay.  But I stand by my God-given right to defend myself.  Our law enforcement agencies will never be able to protect us from all the bad guys.  Only someone with a gun could have stopped that madman in Newport, and the truth is that the police would not get there in time.  And if one of the administrators in that school office had been armed, perhaps he never would have made it to those classrooms filled with beautiful children.
I've said my piece, and there's nothing more to be articulated.  I will now pray that cooler heads will prevail and I will not have to trust my safety, or that of my loved ones, to another person or government agency.  No one has more interest in my security and protection than me.  Let me defend myself!

Psalm 38:12    "Those who want to kill me set their traps, those who would harm me talk of my ruin; all day long they scheme and lie."


http://www.snopes.com/politics/guns/switzerland.asp
Posted by Pam Kohler at 7:00 AM