Yesterday was a day our nation honored its Veterans.  It's a time to contemplate what our soldiers and military have contributed to this country since its inception.  It's a time to recognize their sacrifice, on our behalf, for the freedoms that still remain.  We offer our prayers of thanksgiving and praise, and ask for their protection and continued strength of character.  All this is well-deserved and more necessary than you realize.
You may recall that during my visit to Fort Sam Houston last spring, I told you that the Army Chaplains were becoming increasingly distressed at the compromises they were being asked to tolerate. Christian crosses were being removed from religious services; they are no longer allowed to counsel against homosexual relationships, and the Koran is gaining equal status with the Bible --- all regulations that are in disagreement with their Christian faith.  Many are contemplating leaving the Military.
Then, just seven short months later, I returned to Fort Sam, and felt such a despondency among our soldiers, and a significant lack of faith in God.  It was apparent to me that we have a growing problem among our armed forces.  So imagine my shock when I saw this local headline:  Lackland Air Force Base Hosts the Largest Weekly Wiccan Service in the World. 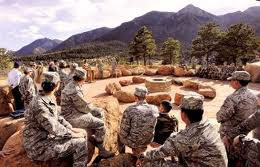 You read that correctly!  Right here, in the State of Texas, Lackland Air Force Base in San Antonio boasts of the growing participation among military personnel in Wiccan services.  In case you didn't know, Wicca is a modern pagan religion that draws upon a diverse set of ancient pagan religious motifs for its theological structure and ritual practice.  According to its official Wikipedia definition, the religion usually incorporates the practice of witchcraft.  Each week, a volunteer lay leader conducts religious education and services for two to four hundred Air Force basic trainees.  And now we are supposed to applaud the fact that "Nowhere else in the world are as many as 400 people sitting down to see a regularly-scheduled weekly Wiccan service performed?"
As stated in the article, the Air Force has adopted a unique chapel program for their Basic Military Trainees.  A small number of Air Force chaplains, primarily Protestant, with one or two Catholic chaplains and a Muslim chaplain, conduct services within their own faith groups and provide oversight for the rest of the chapel program.  The rest of the program is supported by volunteers, and a Religious Resources Board supposedly monitors this diverse religious education and service program.  So might I respectfully ask ...... What in the *#@! are you doing???
What was even more disturbing to me was the author of this article.  The credit line reads as follows:   Rev. Tony Gatlin is a Wiccan High Priest.  He currently serves as the Distinctive Faith Group Leader for the Wicca Faith Group at the U.S. Air Force’s Basic Military Training program at Joint Base San Antonio-Lackland Air Force Base, Texas.  He is a retired military veteran of 25 years, having served both as an enlisted Marine and Air Force officer.  Rev. Gatlin holds three Masters Degrees and lectures internationally on the history of Wicca and the U.S. military.
Is this the influence that is now beginning to permeate our military?  In a 2011 LA Times article, it was reported that the Air Force Academy, in Colorado Springs, dedicated an $80,000 outdoor worship center — a small Stonehenge-like circle of boulders with propane fire pit — high on a hill for the handful of current or future cadets whose religions fall under the broad category of "Earth-based." Those include pagans, Wiccans, druids, witches and followers of Native American faiths.
And before I start receiving emails that I am over-reaching or exaggerating this situation, let me quote a young Airmen from Lackland Air Force Base:  "There's nothing wrong with Wicca".  The 19-year-old became a witch five years ago after being a religious wanderer. He said fantasy books and the Harry Potter phenomenon fueled his interest in the Wiccan faith.  He said he found a faith fulfilling to him, and is among the hundreds of basic military trainees who have chosen to study witchcraft at the base. 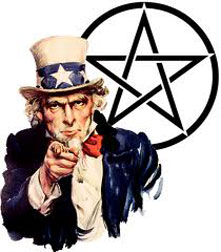 So will there one day be Wiccan chaplains in the military? Not unless a specific “religious organization” applies for recognition, according to Air Force Col. Richard K. Hum, executive director of the Armed Forces Chaplains Board.  But according to Department of Defense Directives (1304.19, for instance), when a qualified Religious Organization (RO) presents a candidate for the chaplaincy, the individual military service evaluates the candidate according to service need and the candidate's qualifications.  If it is determined that there is a need and the candidate meets the qualifications, then said candidate may be offered a commission.
Is there any doubt in our current climate of tolerance that this is an inevitability?  I must confess that I feel we are entering a very dark period in our nation's history (and the world's).  My father, who was a World War II veteran, would not recognize today's military.  And is it any wonder that Christian chaplains are questioning whether they can continue to turn the other cheek when our faith is being ridiculed and oppressed?  While prayer is obviously needed in this situation, I'm not too sure the die has not already been cast.
In the coming days I will be expressing a new direction in my posts; an opinion I can no longer avoid or ignore.  It is still about hope and promise, but in the light of such stories as today's post, my message must be bolder and more determined.  We must know who we are and be prepared to reach out to others in this time of deep trouble.  Lift your eyes heavenward and stay focused!

Deuteronomy 18:10     "Let no one be found among you who sacrifices their son or daughter in the fire, who practices divination or sorcery, interprets omens, engages in witchcraft..."

Email ThisBlogThis!Share to TwitterShare to FacebookShare to Pinterest
Labels: Military, Our Culture.