Red Dawn: A Review And Reflection

I suppose, like many of you, that I have been awaiting the release of the re-make of Red Dawn with both curiosity and dread.  The original has become a cult classic, and how could Hollywood do justice to both the story and iconic actors such as Patrick Swayze, Ben Johnson, Powers Boothe and Harry Dean Stanton?  Yet, in the 28 years since Red Dawn first appeared on the screen, the premise of the movie doesn't seem quite so improbable anymore.

Don't worry, I won't ruin the movie for you, if you haven't seen it yet.  But if you want my recommendation ... I give it two thumbs up.  Without giving anything away, let me just say that I was impressed with this version.  The producers were smart enough not to try to re-create an exact replica of the movie, but instead chose to revise the storyline just enough to make it seem new and fresh, while giving proper respect to all the things we loved about the original version.   My biggest concern, was that Patrick Swayze was so identified with the lead character, Jed, that anyone else playing that role would diminish the impact of all the character interactions.  Not so.  Chris Hemsworth not only makes the role his, but possesses the same strength and spirit as Swayze.  This new version made me feel just as proud to be an American as the original, and that's all I'm going to say about the plot and movie.
But, the new Red Dawn left me with more doubts about how we would react than the first one did.  In 1984, I felt we were all like Jed and Mattie.  Foreign troops falling from the sky?  While it was a great movie plot, and sent a shiver down my spine, it wasn't really anything I considered as likely; after all, Ronald Reagan was President and America was feared and respected around the globe.  And if this scenario did play out, we were the sons and daughters of WWII vets, and we knew what America stood for and that she was worth fighting for.  We stood behind our nation.
I asked PLW if he thought we would really react and fight against foreign attackers if, today, we saw parachutes in the sky.   Unfortunately, neither one of us could answer that question with any kind of confidence.  Another generation has passed since the first Red Dawn, and based on the news coverage of Black Friday alone, we seem to be all about fighting for ourselves and could care less about defending the nation. 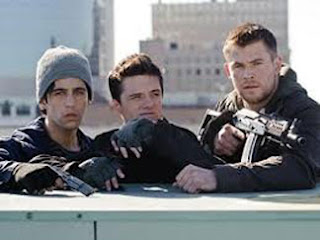 I absolutely think that there is a segment in this country that would die fighting to save this blessed land.  And I'm not talking about the military.  Hundreds of thousands of ordinary citizens would rise up and defend the homeland that they love and revere.   But just as many would sell out their neighbors and give up our nation's sovereignty without so much as a second thought.  Promise them a phone and rent-free space in the refugee camp, and they'll deny the Constitution all day long.
This leads me to the questions that haunted me throughout the movie .... How many people are willing to conceive of a cause greater than themselves?  Would individuals really be willing to sacrifice their own safety and comfort to ensure that our nation remains free?  Do people even know the real meaning of freedom anymore?  By freedom, I'm talking about more than not being subjected to a foreign domination or despotic government, although that is certainly a valid definition, and present in the theme of this movie.  But, to me, freedom is much more individual;  it's not being enslaved by a system, and it is having the ability and the will to self-determine the quality of your life --- both of which the characters in the movie embody.
But when you take into account that Americans who depend on the government for subsistence has risen from 30% at the time of the original Red Dawn in 1984, to 49.1% in the first quarter of 2011(Wall Street Journal), you have to wonder if Jed and Mattie and their friends would find enough people to rally around their cause.  With those kinds of statistics, does it appear that more of our fellow countrymen have sought to bind themselves to the system?  Do they value self-determination, or are they simply more interested in handouts?   Would this generation of Americans have any "fight" in them, or would they choose to surrender to the enemy in favor of "global unity"?  I submit to you that the answers to these questions define the character of America today.
I pray to God in heaven that I will never see foreign troops parachuting into our cities and countryside.  And I'm one of those people (you can call me a nutcase) that can't quite dismiss the thought that Hollywood forecasts our future through subtle innuendos in their film projects.  If there's any truth to that, then maybe all is not lost.  I'm happy to report that the Wolverines are still alive and well in 2012!