Forgive Them Lord, They Know Not What They Do

I couldn't decide about the many topics that I feel need to be discussed .... Egyptian President Morsi seizing absolute power; or Pravda calling our President a Communist; or should I talk about the UN's attempt to take control of the Internet .... all worthy subjects and issues that will effect us sooner or later.  More on these matters in future posts.
Instead, today, I must make a comment about both words and deeds that I find offensive.  The offenders?  First is artist, Michael D'Antuono, whose painting titled "Truth" was displayed at a community college art gallery in Boston.  The painting depicts President Obama posed as a crucified Jesus Christ, against a backdrop of the Presidential seal.
The second assault on my soul was a statement by actor Jamie Foxx at the recent Soul Train Awards.  Mr. Foxx took to the stage and, in his exuberance, voiced his desire "to give honor to God and our Lord and Savior, Barack Obama." 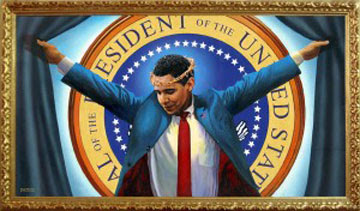 I want to be perfectly clear ---- I am in no way advocating the restriction of the First Amendment rights of these two men.  They have the right to express themselves in these non-violent methods; that is one of the amazing privileges and freedoms that is guaranteed by our Constitution.  Just because it offends me, doesn't mean it should be limited or controlled.  However, I, too, have those same rights, and am entitled to express my opinion, which begins right now.
I don't really fault these two men for their expressions.  Why?  Because they are fools.  And why does this label suit them?   By definition, a fool is "someone who has been tricked or deceived."  It is my firm belief that every human being has the ability and the opportunity to perceive the Creator of the Universe.  Even if it is as simple as being inspired by the magnificent colors at sunrise, or the miracle of birth; we instinctively recognize a greater power.  As Romans 1:19 states, "what can be known about God is plain to them, because God has shown it to them. "  That's where sunrises and newborn babies come in.  Verse 20 makes it even clearer:  "For His invisible attributes, namely his eternal power and divine nature, have been clearly perceived, ever since the creation of the world, in the things that have been made.  So they are without excuse."  So you see, whether human beings choose to acknowledge and honor that Power is left up to us.  There is no excuse; we decide.
In the case of these two men, they have been deceived by the world and our culture into believing that they alone are responsible for their creative urges.  And furthermore, they choose to not only dishonor God, but elevate another man in His place.  And if you need further evidence of their foolishness, consider their own words.  In describing the motivation behind his painting, D'Antuono explained it thus, "The crucifixion of the president was meant metaphorically.  My intent was not to compare him to Jesus." Really?  Since a metaphor is a representation or symbol of something else (or in this case, someone else), just tell me what other crucified person were you symbolizing?  He went on to say that the controversy is being fanned by conservatives, who are “trying to promote the idea that liberals believe the president to literally be our savior.”  Did he hear Jamie Foxx's comments???
I also find it rather curious that in a 2011 interview, Jamie Foxx said that he didn't know what God meant to him.  Hmmm, now suddenly, he's seen the light and he recognizes Barack Obama as his savior?  I surmise that Mr. Foxx has "gotten religion", alright.  A benevolent government that provides all the needs of the people has become his religion, and the leader of that government becomes lord and savior.
But I would caution Mr. Foxx to be sure he knows what "lord" means, and I would urge Mr. D'Antuono to discern the real delusion behind his painting, titled "Truth."  For "Lord" means master or ruler, and one need be very careful whom he chooses to worship as such.  And I will finish out my reference to Romans, by quoting 1:22 .... "Claiming to be wise, they became fools, and exchanged the glory of the immortal God for images resembling mortal men....".
I defend the right of these two talented men to express their creativity and their opinions, as deluded as they might be.  Each of us has the right to articulate our beliefs and viewpoints.  While theirs greatly offend me, they cause me no physical harm.  My pain is spiritual, and it grieves me to see the true Lord and Savior of all mankind treated so irreverently.   Forgive them their trespasses, Lord, as you forgive mine.

Psalm 94:8-9    "Take notice, you senseless ones among the people; you fools, when will you become wise? Does he who fashioned the ear not hear? Does he who formed the eye not see?"