We Deserve The Truth!

I think we would all agree that it's getting harder to find let alone know the truth.  As I write this post, Congress is preparing the first hearings on the Benghazi, Libya attack.  The House Oversight and Government Reform Committee will examine possible intelligence failures, security lapses, and the failure of our Leaders to accurately assess the threat level of Al Queda in Libya and North Africa.  The contradictory statements coming from the Administration and State Department only serve to erode the peace of mind and trust of all Americans.
Combine this uncertainty with official statements that Al Queda and the Taliban have been "set on their heels", and you wonder if our government is living in an alternative reality.  I am just an ordinary citizen who has an opposing opinion, formed by carefully researched sources.  But there are others who  have lived "the truth", and they are speaking out.

For those of you who are not familiar with Lara Logan, let me give you a little bit of her story.  She is a CBS journalist; a foreign correspondent, who covered the Arab Spring in Egypt.  The Administration and the Mainstream Media told us the crowds that embraced Mubarek's overthrow were celebrating newfound freedom.  They were benevolent and intoxicated with the idea of democracy.   Ms. Logan will tell you that there were others who had something more sinister in mind. While reporting from the midst of the "celebration", she found herself surrounded by an angry mob of Egyptian men who beat and sexually assaulted her, calling her a Jew (which she is not).
Ms. Logan now feels it is important for her to step outside her unbiased journalistic role, and give her personal opinion; formed through months of extensive research and interviews with our top commander in Afghanistan, as well as Afghan President Karzai.  She has impressive credentials, having covered U.S. military involvement in the Middle East for years, and feels it is time to tell the truth to the American people.  According to Logan, "the U.S. government is downplaying the strength of our enemies in Afghanistan and Pakistan, as a rationale of getting us out of the longest war....  "they" still hate us, now more than ever. The Taliban and al-Qaida have not been vanquished - and they're coming back."
If you need proof other than this fearless reporter's personal opinion, then I offer you the story of Malala Yousufzai, a 14-year-old Pakistani girl, who worked tirelessly to promote the schooling of girls; something that the Taliban strongly opposes.  Malala lives in the beautiful Swat Valley of Northern Pakistan, which has been compared to the majestic grandeur of Switzerland.  Her home was a popular tourist attraction until the Taliban and Al Queda swept across the border from their safe havens in the Hindu Kush of Afghanistan in 2008.
At the even younger age of 11, Malala wrote a blog under a pseudonym, educating the world about what it was like to live under Taliban rule.   Pakistan's military succeeded in routing the Taliban in 2009, but the leaders escaped, leaving the citizens in a state of constant fear and volatility.  According to a report in The Express Tribune, an internationally affiliated newspaper in Pakistan, "militants forced men to grow beards, restricted women from going to the bazaar, whipped women they considered immoral and beheaded opponents." 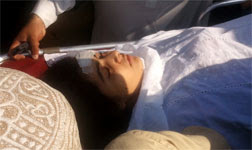 But Malala only became bolder in her writings, especially after the Taliban destroyed over 200 schools (mostly girls' schools) during their short and violent reign.  She showed that Pakistani girls and women had the courage to fight for their rights.  She was very outspoken, vocally supporting Western culture, which only served to anger the Taliban.  And that's when the Taliban struck back.  They stopped the school bus that Malala was riding on, and demanded to know which girl was her.  Another girl identified her, but when Malala denied who she was, they shot both girls.  As I write this post, the bullet has been removed from her neck and she is improving, although still unconscious.
To add to the absolute horror of this murderous act, the Taliban is openly taking credit for the attack, calling Malala’s writings “a new chapter of obscenity” that must be “finished.”
A senior official of the Human Rights Commission of Pakistan, praised Malala for her bravery and said this was an effort "to silence courage through a bullet .... These are the forces who want to take us [back] to the dark ages.”
So I ask you, does this sound like the militant and radicalized Taliban and Al Queda are "set back on their heels?"  Do you really think that their hatred has been tempered by the Arab Spring, or any of our lame concessions?  I submit to you that these two events, along with the recent murders of American citizens in Libya, and prayer rugs and Korans in the deserts of our Southwest, prove that we are not being told the truth.  There is Evil in the world and denying that it exists doesn't make it go away.  Be honest with us!  Anything less is unethical and immoral.

Deuteronomy 31:6        "Be strong and courageous. Do not be afraid or terrified because of them, for the Lord your God goes with you; he will never leave you nor forsake you."