I Can Be Silent No Longer!

For a few weeks now, I have had my suspicions about the truth behind the Benghazi, Libya debacle, but was reluctant to spread rumors or theories.  But as of yesterday, the lid has been blown off this scandalous betrayal of true American heroes.  The father of slain Navy Seal, Tyrone Woods, has come forward to reveal facts that the White House (and I believe, the media) has concealed.
This is not a knee-jerk reaction from a grieving father.  Charles Woods took his time before deciding  that his son's death could not go unanswered.  Our special operations warriors are intensely honorable men, and I'm sure Charles Woods wanted to proceed in a manner that would show respect for his son. 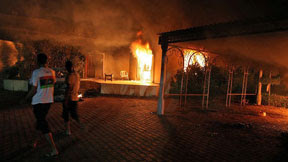 By now, you must be aware of the facts that are coming to light:  1) Ambassador Stevens felt that he was on an Al Queda "hit list", and let it be known that security was not adequate;  2)  There is a still-evolving storyline that indicates the U.S. is involved with supplying arms to Al Queda affiliates in Syria to topple Assad;  3)  As our Al Queda go-betweens in Libya began their attack on the safe house, there were three requests for military back-up.  Former Navy Seals Woods and Dougherty, arrived as part of separate groups to try and rescue Ambassador Stevens and Sean Smith, even though they were told to "stand down";  4)  Those requests were never answered, as the White House watched the attack in real time from a drone that flew overhead.  Regardless of the chain of command .... from the CIA annex to Langley to the Department of Defense .... it all ends up in the Situation Room at the White House.  No excuses!
This is nothing less than a bungled nightmare; a demonstration of incompetence, and a supreme lack of leadership.  And I am indescribably angry! Where was the Commander in Chief when the men, who take their oath of service so seriously, needed him?  I know my opinion won't have any effect on this situation, but I am keenly aware of the sacrifice our military makes to keep this country safe and the best in the world.  I believe in them and honor their service, and I am just so outraged that those who were in command failed them.  AND THEN THEY LIED TO US!
My knowledge and experience is inadequate to understand all the facts and details of how such an operation would go down.  But it is becoming quite clear that it was a fiasco; totally mismanaged and it cost the lives of four Americans.  But rather than me continuing with my indignation, I would like to share a concise and appropriate essay by someone who has the experience to know how this situation should have been handled.  Matthew Bracken is a former Navy Seal, who has written a series of popular books about the decline of America.  He has written a biting post on Western Rifle Shooters Association that lays the blame squarely at the feet of the White House.  No apologies, just the facts! 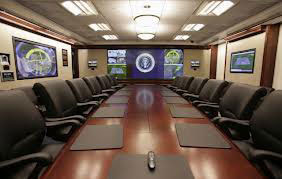 You need to realize this: our military did all they could.  They swung into action; into "crisis contingency plan mode" and were ready to respond with Delta Force, Marines, planes and ships to perform the necessary rescue mission.  But it would be classified as a "cross-border hostile mission", and only one man can give a "Go!" to that order.  And an answer never came.  As Bracken expresses so sharply in his article, "But no order came.  And then none would come..... While his ambassador was off-radar, missing, possibly being dragged down a Benghazi street or even raped... POTUS went to bed.  That is the greatest scandal of Benghazi. The POTUS slept through it, while all around the world, military forces were poised for the Raid on Entebbe or any other damn thing the POTUS ordered them to do. (And they were raring to go, believe me.).... God help us.
So don't take my word for it.  This man knows what he is talking about.  Read his article!
I guess what makes me so angry, and incredibly sad, is that Tyrone Woods and Glen Dougherty displayed remarkable honor, decency and character by ignoring orders to "stand down" and went to the rescue of Ambassador Stevens; upholding their oath to serve and protect.  And those who are in charge of leading these principled men have shown nothing but cowardice; unable to be honest with the American people and lying to cover up their immoral behavior. 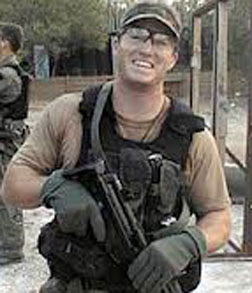 My words seem so inadequate to describe my feelings.  Perhaps we should concentrate on the words of Charles Woods:  “I want to honor my son, Ty Woods, who responded to the cries for help and voluntarily sacrificed his life to protect the lives of other Americans. In the last few days it has become public knowledge that within minutes of the first bullet being fired the White House knew these heroes would be slaughtered if immediate air support was denied. Apparently, C-130s were ready to respond immediately. In less than an hour, the perimeters could have been secured and American lives could have been saved. After seven hours fighting numerically superior forces, my son’s life was sacrificed because of the White House’s decision. This has nothing to do with politics, this has to do with integrity and honor. My son was a true American hero. We need more heroes today. My son showed moral courage. This is an opportunity for the person or persons who made the decision to sacrifice my son’s life to stand up.”
It's time to stop the lying.  It's time to do right by those who sacrificed their lives for America.  I pray that honor can be returned to our land and to our leadership.   As Matthew Bracken so eloquently expressed ..... God help us!

Final Thought:  If you are a faithful reader of this blog, then you know my opinion on the judgments that have come against America due to the decisions made by our government.  Could the coming "Perfect Storm" that is ready to slam into the East Coast be God's reaction to the indefensible position our leaders took in Benghazi?  After all, the storm is right on track to strike Washington D.C.  Something to think about!