Every Picture Tells A Story

I found this heart-warming story on TheBlaze.com, and I felt it was worthy of sharing.  The post is short today, but the picture below tells you volumes.  You know that I am a big supporter of our military, recognizing that they are the first line of defense between us and the bad guys.  In my opinion, their unselfishness, plus their commitment to duty and their mission, set them above and apart from the average citizen.  The photo below captures the heart, the compassion, and the goodwill of our young men and women in uniform. 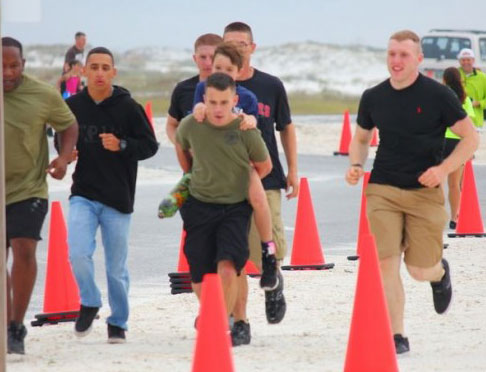 This photo tells an amazing story.  Ben Baltz, an 11-year-old bone cancer survivor, was running in a children's triathalon.  The run portion was only a mile, and his mother, Kim, began to worry when she didn't see him, knowing that he must be tired.
All of a sudden the announcer asked the crowd to focus their attention down the course.  You see, young Ben had fallen, his prosthetic leg breaking from the strain of the run.  He tried desperately to re-attach the leg, and when it was apparent that he couldn't accomplish the task, Pfc. Matt Morgan, part of a contingent of Marines who were helping during the event, picked Ben up and ran the rest of the race with Ben on his back.
The rest of the Marines stepped up, fell into line and ran with the pair, calling cadence for the rest of the run.  I imagine that it was Ben's determination and spirit that the Marines appreciated; his never-give-up attitude.  Pfc. Morgan told ABC News, “He was going to finish the race no matter what, but I told him to jump on and we finished the race together.”
Gunnery Sgt. Wilbur Anderson said he ran alongside Ben and told him, "You're going to be taken home by the Marines today."  Naturally, the crowd was in tears and so was I, after reading this story.  It's why I feel that our military represents the best of America; the heart and soul of our identity.  It's why PLW and I will spend several days at the end of the month at Fort Sam Houston, volunteering at Fisher House.  There, we will see brave soldiers who are dealing with their own prosthetic issues, and it's a way for us to give back -- a way for us to carry them on our backs for just a moment.
I am well aware that our efforts are inadequate; we can never repay them for their sacrifice or all they've given for our country.  I know they don't need or ask for my thanks, but anytime I get the chance to shine a spotlight on the human character of our military, it is an honor.  So take a moment and  contemplate the gentleness, the kindheartedness, the chivalry and the nobility of Pfc. Morgan.  This is what our military is all about.