The News You Won't Find In The U.S. Media

I don't think I am stretching the truth too far when I say that we aren't getting the whole picture of the challenges our country is facing.   We, here in America, are focused on an upcoming election that will undeniably affect whether our nation prevails as a republic.  Our attention is centered on national/personal debt, our fragile healthcare system, our liberties and freedoms, and a high unemployment rate; essentially our concentration is directed inward.  While these problems are paramount to American households and our focus on them is perfectly understandable, there are outside forces that we should be paying attention to.  And you won't hear about them in the Mainstream Media.
I make it a practice to check many different news sources to determine how the news of the world might influence my life.  I compare "legitimate" news outlets such as Fox and CNN; I read blogs that I feel are interested in helping people become educated and prepared; I check news sources like World Net Daily and Worthy News; and I also like to see what sources around the world have to say.  It's sometimes an eye-opener to see the take Israeli websites have on world affairs. For instance, our U.S. Media has given us a very veiled picture of the ramifications of Muslim Brotherhood influence in the Middle East.  We've been told that the "Arab Spring" and the rise of the Brotherhood was an expression of democracy and free elections; something that we should be applauding.  But Debka File, an Israeli news site that covers events in Israel and offers political analysis for international readers, gives us a different side to this story.  As with all sources, I'm sure they have a bias towards their own interests, but at least we have the opportunity to compare both perspectives and make up our own minds, instead of being fed an "official" line.
On Wednesday of this week, Debka File reported that Jordan is under serious pressure from the Muslim Brotherhood.  King Abdullah II has been given until October to bow to the MB's demand to abdicate his throne in favor of a constitutional monarchy, or he will face demonstrations and riots like those we've seen in Egypt, Libya and Syria. 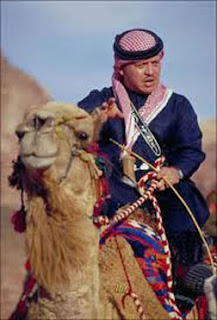 As if that is not enough, the royal kingdom in Saudi Arabia is reportedly panicked that they would be next on the list, should Jordan acquiesce to the Brotherhood's intimidation.  In short, the MB is on a clear path to take command of the Middle East.   It appears as if King Abdullah has three choices:  give up his throne and give in to the demands for a democratic election (in which the MB hopes to gain two-thirds majority),  2) plunge his nation into civil war if he decides to fight the coercion, or  3)  try to compromise in the hopes that the radical elements of the Brotherhood can be kept at bay.
Sources at Debka File report that the MB already has 50,000 demonstrators waiting in the wings should the King hesitate to make a decision or try to buy more time.  After what we've seen in Syria and Libya the last few weeks and months, that doesn't bode well for his Royal Highness.
Yet James Clapper, our National Intelligence Director, testified before the U.S. Senate Committee on Armed Services, that "The term 'Muslim Brotherhood'...is an umbrella term for a variety of movements.... there is no overarching agenda, particularly in pursuit of violence, at least internationally."  And then Representative Michele Bachmann's suspicions that the MB has infiltrated our own government is dismissed as "specious and degrading."  Tell me, in light of the news from Israel, do you have much confidence in the portrait of Middle East democracy that's been painted by our Administration?  Who sounds more credible --- Clapper or Bachmann?
It is quite apparent that the Jordanian Muslim Brotherhood no longer wishes to use the tools of propaganda or political debate; they have moved into organized protest.  The Middle East is watching to see how the White House will respond.  From the President's appearance before the U.N. General Assembly this week, I think we know the answer.   But it is apparent to me that we are way beyond pacification and fence-mending.  Jordan, another democratic ally, is on the brink of overthrow.  And Israel finds itself increasingly surrounded by hostile neighbors.  As a nation, America needs to decide whether we stand behind our allies in the Middle East or continue to offer the olive branch to a movement that is determined to establish its own form of autocratic rule in the region.
I suppose there is a reason that the MSM doesn't report this news.  After all it doesn't suit their purposes, does it?  So it is incumbent upon each and every one of us to be responsible for educating ourselves and researching world events.  Because we can no longer focus on just our own problems here at home.  There is a Force coming against the world and we will not be immune to its agenda.   The world's crises are our crises.  We are up to the task, but time is running out.

Psalm 55:21     "His talk is smooth as butter, yet war is in his heart; his words are more soothing than oil, yet they are drawn swords."