What Christian Faith Looks Like In The Rest Of The World

In keeping with Monday's post on the "Normalcy Bias", today I want you to broaden your understanding of how our Christian faith is being experienced in other areas of the world.   And if you are not a Christian, I still think you will find this post educational.  You see, the Body of Believers in America have been facing mounting opposition to the public expression of our faith and religious practices.  It's a resistance and hostility that we don't really know how to defend against.  While it has been growing over the last few decades, we have largely sat back and adopted a "turn the other cheek" approach.  And while there are those who contend that we are not a Christian nation, they ignore and malign the very basis of our founding.  But we Christians, in America, have not served our faith well.  We have not safeguarded and shielded it from abuse.  We have taken our religious liberties for granted and can't quite comprehend a day when it might be dangerous to be a Christian.  Maybe we American Christians need to pay a little more attention to what is going on in the rest of the world. 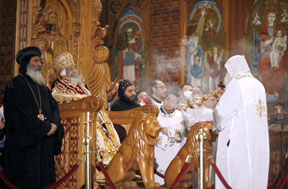 Take for instance, our fellow Believers in Egypt and Syria.  The Coptic Christians of Egypt were once the dominant religious group in the country, but are now an oppressed minority; denied religious freedom and equal status in Egyptian society.  They have a long history in this ancient land, and it is not  only interesting, but prophetic.  Here is a short synopsis:  The Copts are the indigenous inhabitants of Egypt, before the Arab/Muslim invasion around 641 A.D.  Tradition teaches that the Apostle Mark converted the pagan Egyptians of the 1st century; by approximately the 3rd century, Christianity was the dominant religion; and by the 7th century when Islam burst into Egypt, Christianity was THE religion.
Muslim persecution of the Copts began with the Islamic invasion.  At first, and because the Copts were the majority people of Egypt, they were merely deemed a subject race, to be heavily taxed and kept in line by their Muslim overlords. (See Jizya.) Over the years, however, their subject status came to be organized under what is seen as Islam’s divine and immutable law, or Sharia.
So how are modern-day Coptic Christians treated in Egypt?  There are approximately 10 million Copts in Egypt, which is roughly 12% of the population.  This is not an insignificant number.  In fact, in the entire Middle East, Copts make for the largest Christian minority.  In recent history, the "persecution" of Coptic Christians meant that the best jobs went to Muslim citizens.  But today, persecution is more likely to look like it did in past centuries, with the burning of Christian churches; and with Islamic extremists, now holding positions in Parliament, expanding the country's strict Islamic laws.  During the recent uprising in Egypt, many Coptic Christians paid with their lives.  And the Egyptian Christians are very aware of the long-suppressed Muslim Brotherhood, who have now been freed from former President Mubarak’s tight leash on those advocating for Sharia and a Muslim Caliphate, and have recently risen to the forefront of Egypt’s political and religious life. 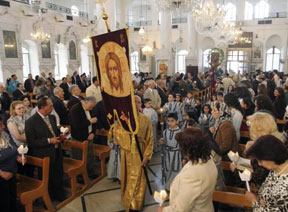 Now let's take a look at Syria, which as far as the Christian faith is concerned, is a conundrum, for lack of a better word.  Even under the tyrannical rule of President Bashar al-Assad, (in which over 17,000 people have died since the uprising began in March, 2011),  many Christians believe his regime is the only true guarantor of secularism in Syria and, with it, the acceptance of the Christians as equals to their Muslim neighbors. Further, many Christians firmly believe that what will replace the regime, (if it is toppled), is a fundamentalist Muslim theocracy that will strip Christians and other minorities of their political and civil rights, including their right to practice their religion in peace.  Starting to see a pattern here?  You have Christians caught between political correctness and Sharia law.
From my humble perspective, there seems to be a false sense of security placed on the Assad government ---- kind of like getting into bed with an Egyptian cobra.  Take, for instance, this account by Hind Aboud Kabawat, a Syrian attorney, who reported the case of a young woman from Damascus, named Caroline, who said she was arrested earlier this year and imprisoned for 25 days in a two-square meter cell. Her crime? Giving children Easter eggs wrapped in paper containing verses from both the Koran and the Bible.  I'm not sure I'd want to put my trust in this 40-year-old regime that has been more than willing to use brutal violence to silence its critics.  Hint:  17,000 deaths and climbing. 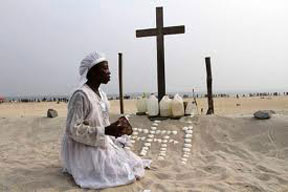 And then there is the plight of Nigeria.  Boko Haram, a radicalized Islamic sect, has left over 700 Christians dead, this year alone.  They warn Christians to either convert to Islam or die.  Sharia Law is their stated objective.  The Christian majority in the south has tried to negotiate with Boko Haram, calling for peace and religious tolerance. But in the north, Boko Haram is encouraging and carrying out more attacks on Christians.   Suicide bombers, tribal (and religious) warfare, and civil war have become the norm.
And the list of nations goes on and on:  Sudan, Iraq, Iran, Pakistan, Ethiopia.  In the Middle East and Asia, Christian communities face increasing violence and opposition from strict Islamic governments.  Tolerance seems to be a one-way street, and governments that once offered protection to minority religions, and professed freedom from racial, ethnic and religious prejudice, have been hijacked by radical and extremist leaders.   We Christians in the West have thought we were sheltered from such perils.  Which brings me back to that reference to "normalcy bias."  Think it can't happen in America?  Think that we are immune to such oppression and discrimination?  Just look around you.  Could you have imagined not being allowed to hold a bible study in your home?  Or at a local McDonald's?  It happened!  And it's coming to a governing body near you; and it's coming soon.

Romans 8:35      "Who shall separate us from the love of Christ? Shall trouble or hardship or persecution or famine or nakedness or danger or sword?"