We Have A Choice To Make!

It has been awhile since I've written a post on the Constitution series that I studied through prestigious Hillsdale College, the independent, liberal arts college known for its unabashed conservative ideals.  The lecture I studied this past week was titled The Recovery of the Constitution.  This particularly intrigued me, because I feel we are at a crossroads in this country.  The next six months will determine if we follow the path of liberty and freedom established by the Founders, or venture down the path of enslavement to the Federal government offered by the Progressives.  As it has been declared, our choice is "fundamental."
Dr. Larry Arne, President of Hillsdale College, began his lecture by quoting Abraham Lincoln (who was actually quoting the Bible) when he said, "A house divided against itself, cannot stand."  We are so divided today that, ultimately, we have to go one way or another.  One side believes in limited government and restraints against a growing government that impedes man's natural ability to govern himself.  The other side promotes the idea that we have advanced so much through technology, science, organization, and knowledge that we require a "new" kind of government; one that actually needs to be larger, and expanded, to take control of everything.  The old restraints are in the way, and impede us from being all that we can be.
These two principles are obviously not compatible.  You cannot have both.  That's our choice in the upcoming election.  Pure and simple.  And I'd like to present aspects of two different speeches that Dr. Arne used in his lecture to point out the contrasts between these two ideals.  The first speech was by Franklin Delano Roosevelt, when he launched his campaign for President in 1932.  The other is the speech given by Ronald Reagan when he assumed the Presidency in 1981. 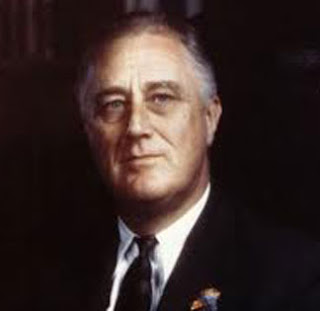 Roosevelt, in his address to the Commonwealth Club, gives his description of the Declaration of Independence: "The task of statesmanship has always been the redefinition of these 'rights' (life, liberty, and pursuit of happiness) in terms of a changing and growing social order."  The problem is that Roosevelt feels that government is under "contract" with the people, and that contract should be altered whenever the "needs" of the people are determined to be unfulfilled.  He seems to have forgotten that the Declaration of Independence was no contract at all.  "We hold these truths to be self-evident, that all men are created equal, that they are endowed by their Creator with certain unalienable Rights...." The problem is this:  he had lost the meaning of that word "unalienable".  It's original intention was rooted in the word "lien" --- as in contract --- and the "un" prefix meant you couldn't get rid of them!  That contract for those specific Rights was between man and His Creator!  No government could alter or destroy them!
This is a clear mis-reading of the Declaration of Independence, and there is a reason for this misinterpretation.  He is trying to state that since the times are different than when these Rights were first specified, then they must be redefined to fit the current society.  In other words, everything shifts fundamentally with time.  Perhaps he should have re-read Alexander Hamilton:  "The sacred rights of mankind are not to be rummaged for, among old parchments, or musty records.  They are written, as with a sun beam, in the whole volume of human nature, by the hand of divinity itself....".
In essence, Roosevelt is saying that in the "new conditions" of society, you can't be secure in your property unless the Government can guarantee your property.  And of course, it can't guarantee your property, unless it has a claim on all your property.  And it just makes sense, doesn't it, that this kind of new Government can't be limited by such old notions as representation, limits on scope, and separation of powers.  Sound familiar?
Now, contrast this ideology with Ronald Reagan's first Inaugural Address.  He points out that the orderly transfer of power from one party to another is unique in the history of the world; it is done "according to the democratic will of a free people", and it happened for the first time in history in 1800 in the United States of America.  Reagan, in his speech, calls this nothing less than a miracle. 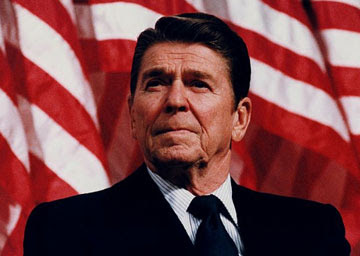 Remember that when Reagan assumed office we were in a world of hurt economically, and we faced unprecedented foreign policy crises.  "Government," said Reagan, "is not the solution to the problem.  From time to time, in America, we have come to believe that society is too complex to be managed by self-rule.  Government by an elite group is superior to government for, by, and of the people.  But if no one among us is capable of ruling himself, then who, among us, has the capacity to rule someone else?"  That is brilliant!   So, if under a system of self-rule, Government is not the solution, who is?  Obviously, it is us, as individuals.  We, the people, are still the best form of government on this planet.
Another moving aspect of Reagan's Address was the fact that he moved the location in order to face the National Mall, where he could give tribute to his heroes.  He paid homage to George Washington, the Father of our Country: "a man of humility, who came to greatness reluctantly.  He led Americans out of revolutionary victory into infant nationhood."  Next, he mentioned Thomas Jefferson.  "The Declaration of Independence flames with his eloquence."  He looked beyond the reflecting pools to the Lincoln Memorial.  "Whoever would understand, in his heart, the meaning of America will find it in the life of Abraham Lincoln."
Reagan saluted the Founders of our country:  Washington for his humbleness; Jefferson for his eloquence in writing the Declaration of Independence; and Lincoln as a common and obedient man.  But then he went on to honor those who lay in Arlington National Cemetery; those who went beyond the call of duty to pay the price for our freedom.  They are just as much the heroes of this nation, as those whose monuments grace the National Mall.  Our freedoms have been paid for by individuals, and it is the individual who should have control of his own destiny.
The real meaning of his speech lies in his conviction that what those Founders fought for is the same as what those young men in Arlington died for --- the Rights that are guaranteed by our Creator; not granted from a Government that can redefine them based on a shift in society.
So there you have it!  We have a choice to make.  And our options are clear.  Will we live by the principles of the American Founding, or by the values of the Progressives?  We have six short months to decide.  May God be with us!

Romans 8:20       "For the creation was subjected to frustration, not by its own choice, but by the will of the one who subjected it, in hope"