I'm sure I'm going to be accused of being a conspiracy theorist, but I've had my suspicions for quite some time now.  And this last week, when the FBI and the Department of Homeland Security issued reports stating that for more than a decade “international terrorist groups and associated individuals have expressed interest in using fire as a tactic against the Homeland to cause economic loss, fear, resource depletion, and humanitarian hardship,” it tends to make me sit up and take notice.
You should know that different law enforcement agencies have long suspected that fire could be used as a weapon, because it is inexpensive and you don't need a lot of technical expertise to light a match.  Combine that with the EPA's reluctance to clear brush and undergrowth, and you've got a formula for disaster. 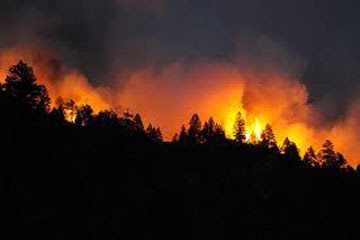 But the real clincher that finally has the alphabet agencies paying attention is a slick online publication called Inspire.  This online magazine is reportedly produced by Al-Qaeda in the Arabian Peninsula.  The most recent issue of Inspire featured multiple articles on the use of wildfire as a weapon in jihad, including a complete guide on creating an “ember bomb” that would likely have a “high failure rate when manufactured and utilized by untrained or inexperienced personnel” according to the DHS report.  Is that supposed to make us feel better?
The FBI has also separately warned about the latest issue of Inspire, which “instructs the audience to look for two necessary factors for a successful wildfire, which are dryness and high winds to help spread the fire. Specific fire conditions that are likely to spread fire quickly are Pinewood, crownfires (where the trees and branches are close together), and steep slope fires (fire spreads faster going up a slope).”  California and Montana are specifically listed in Inspire as potential targets.
I don't know about you, but this scenario sounds totally reasonable.  About 2.9 million acres burned each year in the U.S. between 1985 and 1995, but since then, the average has jumped to more than 6 million acres annually, including at least 5.9 million that burned nationwide in 2009.  There has to be a reason for the dramatic jump, don't you think?
And since these FBI and DHS reports state the threat has existed for more than a decade, it didn't surprise me to read this statement by Rick Ochoa, the fire weather program manager at the National Interagency Fire Center in Boise, Idaho:  "We are seeing a significant trend.  Over the last 10, 12 years, fire activity has been much higher than normal."  Hmmm, let's see .... when did Al-Queda strike the Twin Towers?  Oh, yeah.  Almost 11 years ago.  Coincidental?
And this last week was no exception.  Fires raged across Colorado and New Mexico.  I know that there could be other reasons for these fires.  U.S. fire departments reported over 24,000 fires caused by lightening strikes in 2004-2008.  I find it a little less believable that global warming is the reason for the increase in the last decade, although I'm sure the EPA would like us to buy into that theory.
Nevertheless, I believe this is a very real threat and present danger to our nation.  I'm not sure what we as individuals can do to stop it, except be vigilant and alert.  The continuing drought across the nation is not helping either.  As for me, I will pray for rain and for the Lord to confound and confuse.  We face enough threat of fire from Nature; we don't need a terrorist campaign by fire.