What One Man Can Do

The other evening I had the opportunity to attend a meeting at our local VFW Post, where Sheriff Richard Mack was scheduled to speak.  I knew nothing of the man, except that he had been a County Sheriff in Arizona.   In light of all the pressure upon Sheriffs in Arizona lately, I figured he would have something relevant to say. 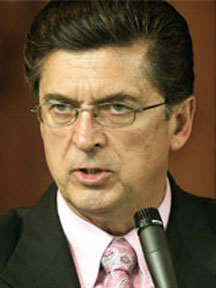 It took only a few minutes into his speech before I realized that not only had I been given an opportunity to hear him speak, but it was an honor to learn from this man's experience.
So just why is he so significant?  Well, in 1993 he sued President Clinton and the Federal Government over their intrusion on States Rights, as it pertains to the 10th Amendment.  Here's the story:  In 1993, Congress amended the Gun Control Act (GCA) by enacting the Brady Bill. The Act required the Attorney General to establish a national instant background check system by November 30, 1998, and immediately put in place certain interim provisions until that system became operative.  These interim provisions required Chief Law Enforcement Officers (CLEOs) to engage in lengthy background checks any time there was a sale from a firearms dealer. The CLEOs would have to research in whatever State and local record keeping systems were available and in a national system designated by the Attorney General.  He would then determine if the prospective purchaser of a handgun was eligible to receive that handgun, and if found ineligible, the law enforcement officer would have to provide the would-be purchaser with a written statement of the reasons for that determination.
And if the CLEO did not discover any basis for objecting to the sale, he must destroy any records in his possession relating to the purchase, including his copy of the Brady Form.  Now, besides the fact that this obviously smacks of over-the-top bureaucracy, governmental regulation, and a colossal amount of time taken away from a County Sheriff's duties, you might think that this was an assault upon the Second Amendment.
But Sheriff Mack saw the bigger issue at hand.  Along with Sheriff Jay Printz of Montana, Sheriff Richard Mack filed separate actions challenging the constitutionality of the Brady Act's interim provisions.  And he did it based on the Tenth Amendment.  Simply stated, this is what the Tenth Amendment says:

This is commonly known as State Nullification and what it means is this:  Whenever the Federal Government exceeds its constitutional limits and begins to oppress the citizens of a state, that state's legislature is duty bound to interpose its power to prevent the Federal Government from victimizing its people.   So just what does "interpose" mean?  It means that our local and state elected officials are bound by the oath to the Constitution (that each took upon taking office) to stand between us and an over-reaching federal government.
And that's just what Sheriff Richard Mack did when he decided to sue the Federal Government.  The Government and Attorney General Janet Reno made it known that if he failed to comply with these interim provisions of the Brady Act, he would be subject to arrest.  But Sheriff Mack believed that the Founders designed the Constitution to be a true system of checks and balances, and this Act needed to be checked. 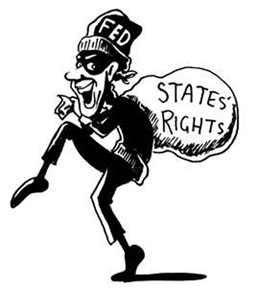 In fact, the Judge of the Federal District Court in Tucson, AZ, who initially heard his case stated, "Sheriff Mack is thus forced to choose between keeping his oath to the Constitution or obeying the Act, subjecting himself to possible sanctions."  And the Judge ruled in favor of Sheriff Mack.  And who was the Judge?  Judge John Roll, who was killed during the attack on Congresswoman Gabby Giffords in 2011.  His legacy is extensive, but his decision that the Brady Law violated the Tenth Amendment may be one of his most important.  By the way --- this case went all the way to the Supreme Court and Sheriffs Mack and Printz won!
So what significance does it have for us today?  Sheriff Mack pointed out to us that the Constitution establishes "Dual Sovereignty"; that both state legislatures and the federal government are sovereign -- they each have spheres and can execute powers that the other cannot.  By the same token, they each have limits on what they can invoke the other to do.
It is his belief that the mountains of federal regulations that we've seen in the last few years are not incumbent upon the states to enact, if it is determined that these regulations are not in the best interest of the state's citizens.  In a very powerful voice, Sheriff Mack shouted, "The Federal Government is Not Your Boss!"  He strongly asserts that we can protect our freedoms by taking back our country --- county by county, state by state.
That means that, as citizens, it is essential that we elect Constitution-abiding County officials, from Judges to Sheriffs to Commissioners, all the way down to the Dog-Catcher.  We can then ask (and expect!) them to interpose on our behalf whenever the Federal Government oversteps its reach.  And that includes such newly-created agencies as the EPA, the TSA, Homeland Security and the Department of Education.
We are perilously close to abdicating our states rights.  If we don't elect officials that know what the Constitution says and believe in the system of checks and balances, then we can expect to see our freedoms disappear.  So I challenge everyone to get involved in your local elections; know who your candidates are and what they stand for.  We can take our country back .... and it starts at the County level.

James 1:25     "But whoever looks intently into the perfect law that gives freedom, and continues in it—not forgetting what they have heard, but doing it—they will be blessed in what they do. "
Posted by Pam Kohler at 7:00 AM