Last week, I read an article by Andrew Napolitano, a former judge of the Superior Court of New Jersey.  He has written six books on the U.S. Constitution, and is a strong advocate for this historic document.  He views it as a contract that must be interpreted the way its authors intended or else it is invalid.  As a Libertarian Conservative, Napolitano believes in "small government" with limited powers.  Which is exactly why I was interested in what he had to say about this topic.
Just yesterday, as Peace-Loving Warrior and I were driving into town, we saw a big, white "bird" sailing across the pastureland just to our left.  From a distance, it looked like it was sailing on currents of wind.  That is, until the sun caught one of its wings in flight, and the glare of reflected sunlight off metal, revealed its true identity.  Less than 100 feet off the deck, and a wingspan less than 15 feet?  What else could it be?  You tell me!  I'm not exactly sure what information this mystery "flying" apparatus was gathering from the assorted cattle grazing in the fields and the farmhouses scattered across the rolling landscape.  But there it was!
And I dare say there are more flying around your neighborhood, too.  You see, the federal government has charged the Air Force to dispatch drones to assist local police in tasks such as finding missing persons or kidnap victims, or to chase the bad guys.  OK, these are all good uses of this equipment, although I'm not exactly sure which of those would have been in that particular pasture, but what do I know? 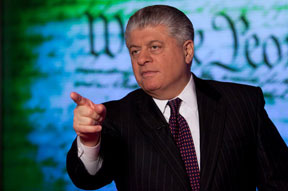 But according to Judge Napolitano, the drone operator might also see other activities that citizens are undertaking, and if he deems it of interest to the government, he may take a picture of you and keep it.  If the government authorizes the 30,000 drones it has forecast over the next 10 years, then this is something that should give pause to all lovers of freedom.
What if the government deems that the fertilizer you're using for your roses might be used in a Timothy McVeigh-style horror?  Is that Sudafed really for your cold, or do you have a meth habit?  It looks as if you are buying lots of chips, Cokes and candy in those bags of groceries, and Heaven forbid ---- are those cigarettes?   And of course, that deer stand in your corn field --- what is its real purpose?
I can hear many of you saying, "Aren't you taking this a little far? If you have nothing to hide, why should you be concerned?"  But just read this quote from Judge Napolitano and see if you can tell where I'm coming from:

If the police use a drone without a warrant to see who or what is in your backyard or your bedroom, or if while looking for a missing child the drone takes a picture of you in your backyard or bedroom and the government keeps the picture, its use is unnatural and unconstitutional.  I say "unnatural" because we all have a natural right to privacy; it is a fundamental right that is inherent in our humanity. All of us have times of the day and moments in our behavior when we expect that no one -- least of all the government -- will be watching. When the government watches us during those times, it violates our natural right to privacy. It also violates our constitutional right to privacy. The Supreme Court has held consistently that numerous clauses in the Bill of Rights keep the government at bay without a warrant.


And a further point is this --- where does it end?  We already have cameras on many street corners, some equipped with listening devices and tiny megaphones.  Megaphones?  Will we soon be commanded to "Stop talking on that cell phone!" or "You're not allowed to eat that hamburger while driving a car!"  And now you have the military (Air Force) involved with law enforcement, which is only supposed to happen in the case of disaster.  And never mind that this collaboration is not the result of legislation enacted by Congress.  The President enacted it on his own.
And to quote Judge Napolitano, "The whole reason we have a Bill of Rights is to assure that tyranny does not happen here, to guarantee that the government, to which we have supposedly consented, will leave us alone."
Does the following map look like we're going to be left alone?  In response to a Freedom of Information Act lawsuit, the FAA recently released the following map of 63 authorized drone launch sites.  Do you see one near you?  Does it give you pause?  It sends a chill down my spine. 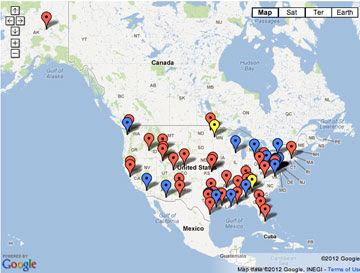 Proverbs 17:23    "The wicked accept bribes in secret to pervert the course of justice."
Posted by Pam Kohler at 7:00 AM