Are You An Ant Or A Grasshopper?

I'm going to reprint my version of a little ditty by Cody Lundin, co-host of the Discovery Channel's "Dual Survival" show, and author of best-selling book, When All Hell Breaks Loose.  His take-off of a favorite Aesop fable, is a little more course in nature, but my rendering will give you an idea of where you stand on the scale of survivability.

Here is the original Aesop Fable:

In a field one summer's day, a Grasshopper was hopping about, chirping and singing to its heart content.  An Ant passed by, bearing along with great toil a stalk of wheat he was taking to the nest.


"Why not come and chat with me," said the Grasshopper, "instead of toiling and moiling in that way?"


"I am helping to lay up food for the winter," said the Ant, "and recommend you do the same."


"Why bother about winter?" said the Grasshopper.  "We have got plenty of food at present."  But the Ant went on its way and continued its toil.  When the winter came, the Grasshopper had no food and found itself dying of hunger, while it saw the Ants distributing every day wheat and grain from the stores they had collected in the summer.  Then the Grasshopper knew:

It is best to prepare for the days of necessity. 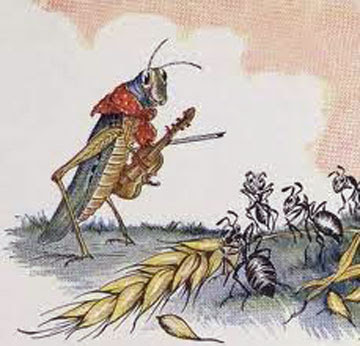 Now if you are reading this blog, then you probably have strong ant tendencies, but Remember, you're not a true ant until you put these blog posts into action. So here goes:
Are you an ant wannabe?  Do you constantly talk about the brown stuff hitting the fan, but do little or nothing to address your talk, preferring instead to bury your head in your iPhone, texting about life's inane topics?
I know plenty of ant wannabes.  They wail and gripe about Armageddon, the Hopi Indian prophecies, the end of the Mayan calendar, the return of Jesus, Elvis, or the mother ship, Y3K, the New World Order, black holes, plague epidemics, depleting ozone, Judgment Day, earth changes, killer asteroids, and exploding, dying or newly created suns.
After they have talked at me, ant wannabes typically end their monologues with a coy look and the phrase, "Well, when the end comes, I know where I'm headed ... HaHa."  Well, God gave you a brain, and where you're really headed is into a time and place that you won't recognize, and will be ill-prepared to get through.  Yes, God is in control, but His plan is to let the full measure of Evil show itself before His Son returns to defeat it for all time.  So in the meantime, there could be some rather unpleasant days.  Remember, "no one knows the hour or the day".......; so don't you think it makes sense to be prepared, just in case?
And wannabes, be warned that your less-than-take-positive-action attitude will contribute to the mass hysteria that will grip the planet when the chaos ensues.  And nothing could be more insulting or arrogant than assuming you will be welcomed to take shelter and the stored food of anyone who has bothered to prepare as they saw fit while you ignored the situation, or pooh-poohed our efforts, and did nothing.
Let me also say, that helping those who have been trying to help themselves by being self-reliant, and who now find themselves caught in a tight spot by a twist of fate, is another thing altogether. My faith will not let me abandon you, but the amount I will be able to share with you will be far less than you desire.  I promise that.  Distribution of my wealth will not cover everyone.
When the talking stops, and the reality hits, I will be able to identify people that will add to our mutual survivability by what they feel is important and by where they devote their action, time and money.  Keep that in mind as you continue to ignore my warnings.
If you're a dyed-in-the-wool grasshopper, but a friendly ant sent you a link to this site, or you have stumbled upon this blog by accident; then congratulations!  You might be able to cultivate ant qualities, simply from following your innate curiosity.  Listen to that still, small voice inside your heart and join me; let's work together, encourage each other and get ready for "the days of necessity."  We can do this!

2 Timothy 4:2      "Preach the word; be prepared in season and out of season; correct, rebuke and encourage—with great patience and careful instruction."
Posted by Pam Kohler at 7:00 AM