"Join together in following my example, brothers and sisters,
and just as you have us as a model,
keep your eyes on those who live as we do." 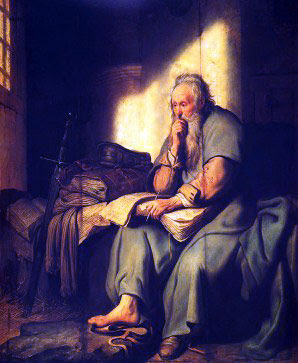 When he wrote this passage of Scripture, the Apostle Paul was being held under house arrest in Rome.  He wrote this letter to the believers in the city of Philippi to thank them for the gift they had sent  him upon learning of his imprisonment for spreading the gospel.
At that time, Philippians prided themselves upon being a prosperous Roman colony, and its citizens saw themselves as citizens of Rome, which had conquered the world.  The believers, both Jewish and those of "the Way", were small in number and in danger of being swallowed up by the culture and/or persecuted for their faith.
Paul exhorted the faithful to keep their eyes on those who lived their lives as Christ had; to follow the examples of those who lived Godly lives.  That is something that concerns me about our culture today.  It seems to me that everyone wants to "belong"; to be part of the "world community."
It is no longer fashionable to set yourself apart from the world and follow a different path---especially one that has Christ at its foundation.   The role models of today are not known for their virtue, or morals, or ethics.  Instead they are known for their outward appearance and what the world sees.  Who cares what God finds written on their hearts or what fruit their spirit yields?
I am very fortunate that I have had people in my life who have been stellar examples of lives to follow.  There have been men who are leaders in business; developing successful companies without abandoning their Christian principles; they have been generous with the wealth that God has given them. There were those women who made it their priority to raise children who put Christ first, and those children became examples to others of the love and acceptance of Jesus.  There are the women who have the unselfish gift of service and ministry; and who have shown me that it is God's desire for us to serve our fellow man.
These same women have been a role model for me of how to express God's gospel of grace and mercy and love to others.   They've shown me that I don't have to present my faith in an overblown manner.  Sometimes, just a touch of my hand and "I'll be praying for you," tells them all they need to know.
And lately, I have been blessed with a growing group of friends, both men and women, who are seeking greater knowledge of God and His will in their lives and in the world.  They don't see themselves as citizens of this world, but claim citizenship from heaven.  They are preparing themselves, just as Paul and his fellow believers did; preparing to stand "against the enemies of the Cross, whose destiny is destruction."
So I want to publicly proclaim my thankfulness to all those who have been examples to follow; those who have lived out their faith in plain sight and been an inspiration to me.  I purposely did not mention names, because I do not want to exclude anyone who has influenced my walk of faith.  But as I wrote these words, I saw each of you in my heart, and I hope you will recognize yourselves because you have inspired me to greater service, motivated me to speak out on behalf of my Savior, and encouraged me to be all God made me to be.  May our gracious Heavenly Father bless you all!