I'm not sure who said it, but there is a quote rattling around in my head at this moment.  It goes something like this:  "Everyone who has ever touched my life in some way was a mentor for good or bad.  Life is a blend, and I am a blend of all the influences that have touched my life." 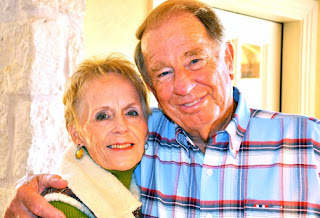 Yesterday I lost one of those people who had a unique effect on my life, and yes, she was an influence.  Faye Edwards lost her long and courageous battle with ovarian cancer.  Mentor is too small a word for all the things Faye was to the countless people she impacted.  Along with her husband, Barkley, she was my boss for many years, and she showed me that a woman could run a business and be as strong and tough as she needed to be.  "Iron Duke" was not just a whimsical nickname.  It described her to a tee!  She paid you a salary and she expected you to do the job you were hired to do...with no whining and no excuses.
Yet, she could also be a mother hen to her employees, and she cared about their lives.  I know for a fact, that more than once, she advanced pay to some down-on-their-luck member of the staff.  And she was generous in sharing her advice and wise counsel.  It was not uncommon for her to close her office door and spend a considerable amount of her valuable time listening to the problems and troubles of anyone who needed guidance.  Eight-hour days were not in her vocabulary.... ten or twelve was more like it.
But my memories of Faye involve so much more than her work ethic:  her contagious laughter; her love of Mexican food and a good margarita; slow boat rides on the lake; the best parties I've ever been to; our talks around my birthday (in the 12 years since I've worked for her, only the advanced stages of her illness kept her from calling me and wishing me a happy birthday).
And you should know that this woman was an unapologetic believer in the goodness of America!  The last few times I talked to her, she was adamant that we had to fight for this country.  And she knew what it was to fight!  She was one of eleven children and had worked long and hard to achieve the American dream, and she wanted to preserve it for her grandchildren.  She was angry that we had become an entitlement nation and she could articulate her position with the best of them.  She knew the value of hard work; she was fearless; and she was principled --- all virtues that were honored in her generation.  I pray they won't become a thing of the past.
And being the fighter she was, she battled her cancer with a vengeance.  I honestly believe there is no one else who could have withstood the punishment of her treatment like Faye.  More than once, her doctors gave her little chance, yet she rallied each time and continued the fight.  My husband and I shared brunch with her and Barkley about a year ago, and you would never know she was in pain.  The ensuing months became more difficult, and in the end, the cancer finally won.
But I will take away many things from having Faye Edwards in my life, and I will always remember her for her determination; her gutsiness; her compassion; her zest for life; her courage, and her loyalty.  And this quote by Henry Van Dyke sums up what I think is Faye's legacy:  "Be glad of life, because it gives you the chance to love and to work and to play and to look up at the stars."