.....And I'm talking George Washington, not George Bush!  I wanted to know what parting words our first President had to give in his farewell address.  What had he learned throughout his unselfish commitment to our new country?  So I researched the transcript of his final manuscript, written in September 1796.  It was as if he were speaking to this generation of Americans!  And it would serve our public officials well to mind his prophetic words. 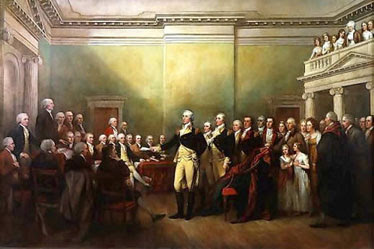 Let me share with you a couple of his wise observances:

".... A solicitude for your welfare, which cannot end but with my life, and the apprehension of danger, natural to that solicitude, urge me on an occasion like the present, to offer to your solemn contemplation, and to recommend to your frequent review, some sentiments; which are the result of much reflection, of no inconsiderable observation, and which appear to me all important to the permanency of your felicity as a People. These will be offered to you with the more freedom as you can only see in them the disinterested warnings of a parting friend, who can possibly have no personal motive to biass his counsel. Nor can I forget, as an encouragement to it, your endulgent reception of my sentiments on a former and not dissimilar occasion.
Interwoven as is the love of liberty with every ligament of your hearts, no recommendation of mine is necessary to fortify or confirm the Attachment.
The Unity of Government which constitutes you one people is also now dear to you. It is justly so; for it is a main Pillar in the Edifice of your real independence, the support of your tranquility at home; your peace abroad; of your safety; of your prosperity; of that very Liberty which you so highly prize. But as it is easy to foresee, that from different causes & from different quarters, much pains will be taken, many artifices employed, to weaken in your minds the conviction of this truth; as this is the point in your political fortress against which the batteries of internal & external enemies will be most constantly and actively (though often covertly & insidiously) directed, it is of infinite moment, that you should properly estimate the immense value of your national Union to your collective & individual happiness; that you should cherish a cordial, habitual & immoveable attachment to it; accustoming yourselves to think and speak of it as of the Palladium of your political safety and prosperity; watching for its preservation with jealous anxiety; discountenancing whatever may suggest even a suspicion that it can in any event be abandoned, and indignantly frowning upon the first dawning of every attempt to alienate any portion of our Country from the rest, or to enfeeble the sacred ties which now link together the various parts.
For this you have every inducement of sympathy and interest. Citizens by birth or choice, of a common country, that country has a right to concentrate your affections. The name of American, which belongs to you, in your national capacity, must always exalt the just pride of Patriotism, more than any appellation derived from local discriminations."


What it means to me:  Liberty and Freedom are to be highly prized, and preserved with jealous anxiety.  Whether native-born or a citizen by choice, we are all AMERICANS, and we should guard against any faction that attempts to divide us along racial, economic or ethnic grounds.  Our tranquility at home, our peace abroad, our national safety, our prosperity and the very future of our freedoms depend on us recognizing who we are.  The United States is worthy of our affections, and being a Patriot is not an ugly word.  We must be aware that there are those who will seek to "weaken our minds" of these truths, and we must hold fast to our national identity.  I am not willing to abandon my distinct honor of being called an American to take on the meaningless designation of "citizen of the world".  I'm not interested in "going global."
President Washington asked us to periodically review the direction in which we are headed in order to secure a permanent state of union.  Instead, what I see is increasingly divisive and alienating speech and actions that are designed to polarize the citizenry and break apart our "sacred ties".

Now, here is the Father of our Country offering his sage counsel on what makes a sound government:

"Of all the dispositions and habits which lead to political prosperity, Religion and morality are indispensable supports. In vain would that man claim the tribute of Patriotism, who should labour to subvert these great Pillars of human happiness, these firmest props of the duties of Men & citizens. The mere Politican, equally with the pious man ought to respect & to cherish them. A volume could not trace all their connections with private & public felicity. Let it simply be asked where is the security for property, for reputation, for life, if the sense of religious obligation desert the Oaths, which are the instruments of investigation in Courts of Justice? And let us with caution indulge the supposition, that morality can be maintained without religion. Whatever may be conceded to the influence of refined education on minds of peculiar structure--reason & experience both forbid us to expect that National morality can prevail in exclusion of religious principle.
'Tis substantially true, that virtue or morality is a necessary spring of popular government. The rule indeed extends with more or less force to every species of Free Government. Who that is a sincere friend to it, can look with indifference upon attempts to shake the foundation of the fabric. "


What it means to me:  Without religion (in this case, I think he means faith in a Just and Merciful God) and morality, it would be vain for men to undertake their civic duties.  He rightly asks, how can citizens secure property, reputation, and life without these two principles undergirding the duties of government?  Those who claim that "reason" and experience are the only guiding tools a politician requires, need only look at the personal and governmental scandals that have plagued our recent public servants.
It seems to me that our leaders have abandoned the influence of Godly principles in favor of what power and influence can offer them personally; abandoning what is best for the public good in exchange for selfish ambition.  It is obvious to me that God was to be an important part of governing our new nation.
Unfortunately, we haven't done a very good job of protecting the Free Government that George Washington fought so hard for, and hoped to guard for future generations.  And I shudder to think what he would have to say to us today!  I, for one, feel we owe him an apology for not watching over his legacy.  And we are at a crossroads; we are on the verge of losing all he gained for us and becoming a nation he would not recognize.  And that makes me profoundly sad.