"It's a Learning Issue"

This past week, I have been haunted by an interview I saw on TV.  It has lingered in my heart and in my mind for days and I just have to write about it.
I'm sure you all have heard the story of Jada Williams, the extremely bright 13-year-old who, as instructed by her teachers, wrote an essay after reading Frederick Douglass' book, published in 1845, called The Narrative Life of  Fredrick Douglass. 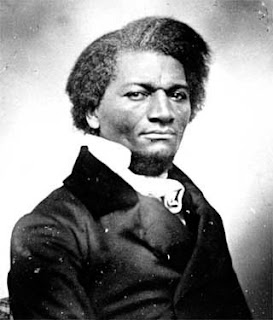 Douglass, a former slave, was an American social reformer, orator, writer and statesman.  He is best known as a leading abolitionist, after escaping from slavery.  As a young slave, he learns the alphabet and how to spell small words, but his master disapproves of slaves being taught how to read, expressing his theory that slaves who know how to read, quickly become unfit to be slaves.  Douglass realizes the importance of reading and decides to learn how to read and learn all he can.  Once he escapes to the North, he becomes the living example that slaves could have the intellectual capacity to function as independent American citizens.
Miss Williams followed her teacher's instruction to the letter:  they said they hoped students would connect with the abolitionist's struggle to learn how to read, at a time when slaves were prohibited from becoming literate.  Essays would be entered in a contest for the Frederick Douglass Foundation.
Jada was moved by the book and was eager to complete her essay.  And, apparently, it was easy for her to draw a parallel between Douglass' experience and the rampant illiteracy she saw in her own city school.  And that's when she got in trouble.  Her teacher has stated that she was "offended" by Jada's essay; and that was just the beginning of her being singled out for her comments.   For starters, her essay was not entered in the contest.
In her essay Jada wrote, "When I find myself sitting in a crowded classroom where no real instruction is taking place I can say history does repeat itself.  The reality of this is that most of my peers can not read, and therefore comprehend the materials that have been provided.  So I feel like not much has changed.  Just different people.  Different era.  The same old discrimination still resides in the hearts of the white man."
Jada went on, "My advice to my peers, people of color, and my generation, start making these white teachers accountable for instructing you.  They tooled this profession, they brag about their credentials, they brag about their tenure, so if you have so much experience then find a more productive way to teach the so-called 'unteachable'."
Now, I know what some of you might be thinking....singling out the "white teachers" does have the ring of a rascist statement.  And when it's read as the written word, it is easy to assume the same meaning as her teacher. 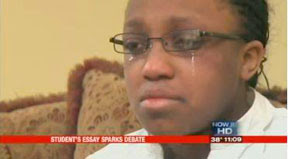 But after viewing an interview with this young girl and her mother, I think her message has been misread.  She bravely faced the camera, and tried to explain.  "I feel misunderstood," said a tearful Jada.  "I used the language Frederick Douglass used in his book.  Grownups are making it a racial issue, when it's a learning issue."  She took a deep breath.  "I also feel hurt, because I'm not in school right now."  (Her mother removed her from the school after teachers began reporting she was "angry", and her usual high grades began being reported as "slipping").   "They're taking from me the one thing that I do love, and I feel confused because...... (here she stops, suppressing a sob, tears streaming down her face)....because I thought I lived in a country of freedom of speech."
During this phase of the interview,  Jada's mother encourages her daughter that it's OK to cry, and then states, "I know this is absolutely not about racism, it's about the education of our children, and that's what needs to be the focus.  If that's all it's about (color), then how far will we ever get?"
So now we have a thirteen-year-old girl who is keenly aware that our First Amendment Right of Freedom of Speech is in jeopardy.  And it saddens her.  For speaking her mind, and honestly expressing her opinion, she began receiving low grades, threatened with in-school suspension, and her records were not shared with her parents.  She was branded a problem.  Her parents decided to pull her from school and after trying to get into several other schools, were told to try "this one".  That school turned out to be a school of throwaway students who were deemed unmanageable;  in short, the school system took an exceptional student, with the radical idea that kids should learn to read, and they punished her for daring to speak her mind.
At the core of her essay, Jada dared to compare today's poor educational system with the system that  Frederick Douglass experienced.  She feels that illiteracy holds her fellow students back in society.  Her call to action was declared in the summary of her essay:  " A grand price was paid in order for us to be where we are today;  but in my mind we should be a lot further, so again I encourage the white teachers to instruct, and I encourage my people to not just be a student, but become a learner."
So Jada Williams, instead of being commended for her intelligence and her keen mind, has been persecuted for speaking her mind.  And like Jada, this loss of our Freedom of Speech saddens me, too.

On Saturday, February 18, 2012, the Frederick Douglass Foundation of New York presented the first Spirit of Freedom award to Jada Williams.

1 Timothy 4:12    "Don't let anyone look down on you because you are young, but set an example for the believers in speech, in conduct, in love, in faith and in purity.
Posted by Pam Kohler at 7:00 AM