Saturday Morning Commentary: We Are All In The Same Boat

Thanks to Jim Rawles, who linked to this article on survivalblog.com.  We often get so caught up in our own economic woes and who we think the enemy is, that we forget there are real people behind the headlines.  Such is the case with the citizens of Iran.
Iran's disputed nuclear program has understandably brought the attention of the world upon their leadership.  What you may not know is that the country is also suffering from runaway inflation and a falling currency, both of which are drastically affecting the Iranian citizens.
Just as we, the individual American citizen, is not defined by who sits in the Oval office, not all of the Iranian people should be defined by the rants of Mahmoud Ahmadinejad.  Yes, the proponents of radical Islam abound in Iran, but millions of their citizens do not follow this destructive ideology.
International sanctions have increased the uncertainty and financial hardship that plague the Iranian people.  While the cost of goods is on the rise in America, we have not yet seen the 21% inflation rate that Iran suffers under.  (That is the official rate; critics say the real inflation figure is around 50%).  And so the people of Iran have begun to stockpile goods and food, in fear of possible shortages.
And it seems we each fear, at least to some degree, an attack coming from the other's government.  Daily, we see crawlers across our TV screens, claiming that Iran is threatening to destroy both the "little Satan" (Israel), and the "big Satan" (the U.S.).  Ironically, the citizens of Iran fear an imminent attack by Israel and the U.S. 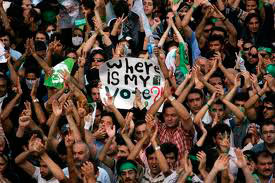 Reportedly, the value of the Iranian currency is plummeting and the Iranian people are frantic to find safe havens for what is left of their savings;  they are flocking to hard currencies and gold.  Sound familiar?  Unemployment is crippling, and strikes are on the rise.  The Iranian people are preparing for an election in a couple of weeks, and their government's economic policies are at the forefront of citizens concerns.  But unlike our election in November, there appears to be an apathy, at least among a portion of the Iranian citizenry.  They see no reason to vote, thinking things will not change.  They are focused on figuring out how to minimize the suffering of daily existence in their home country.  For the educated, young middle classes that means finding a way out of Iran.  Increasingly, they line up at foreign embassies in search of visas to begin anew in distant lands.
My point in writing this post?  To draw attention to the fact that there are forces at work; forces that are trying to create a utopian world government, and that they are failing miserably.  Show me where this system has produced prosperity and plenty for the masses.  These same forces want us to see each other as enemies.  Make no mistake, we do have enemies!  There are ideologies that hate us and want to destroy us.  But to blanket the world's population as adversaries is to fall for a false flag.
I'm not sure there is enough time to change the direction of the world, but I do know one thing.  I believe that people can be led by ideologies of fear and hate.  But I also believe in the power and authority of my faith to overcome the sins of man.  We all need to take a stand for what is right and good, and pray for our deliverance from what has been set in motion.

Psalm 14:2    "The LORD looks down from heaven on all mankind to see if there are any who understand, any who seek God."
Posted by Pam Kohler at 7:00 AM