Saturday Morning Commentary: Human Rights and The Canary In the Coal Mine

I have not disguised my faith and my belief system, and while my comments this morning certainly fall within that scope, my post has a much broader relevance for the world in general.

I want to be up front.  My faith leads me to a Scriptural love for the land of Israel.  And I have recently developed an online friendship with a young couple who live in Jerusalem, and are raising three beautiful children.  We share a devout belief in Jesus, and that is at the foundation of our relationship.  BUT, I am learning so much more about what life is like for my new friends -- and I fear that their experience is just "the canary in the coal mine".
You see, the picture that the media and "the world" shows us about Israel is quite distorted.  They would have us believe that it is a nation of Zionists who have displaced the Palestinian people, and are war-mongering aggressors.   Whatever side you fall on politically, an interesting history of the UN 1947 Resolution, might clear up a lot of your questions.  The purpose of this post is not to argue the Israel/Arab dispute, but to share with you some concerns that might soon affect us all.
First of all, I must tell you that my impression of life in Israel was way off the mark.  I definitely saw Israel through rose-colored classes.  My naive impression was based on my Christian perspective of the Holocaust, and I envisioned a people returned to their ancestral homeland, unified in an embrace of their Jewish faith.  Boy, was I ever wrong!  The state of Israel is much like our own country.  Secularism battles the Faithful, and within the religion of Judaism, there are radical sects who hate, yes, hate those who declare their hope in Jesus Christ.  But it has gone far beyond disagreements over doctrine.  Let me explain:
Among the Jewish people, there are many labels -- Secular Jews vs. Orthodox Jews (who are further identified as Modern Orthodox, Ultra Orthodox, etc.) vs. Messianic Jews.  Their religious differences are now spilling over into human rights issues.  Recently, advocates for women's rights in Israel held a large protest against an extreme Ultra Orthodox sect, called Eda Haredit.  This sect seeks to impose very restrictive standards in territories of Israel where they have a significant number of residents.  This includes making women walk on the other side of the street so that the men will not be defiled by accidental contact.  They also enforce rigidly modest dress codes, as well as force women to ride in the back of public buses that provide service to their neighborhoods.  I don't know about you, but this doesn't seem too far from the restrictive Taliban rules! 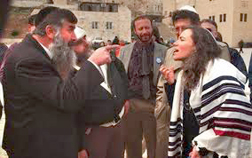 This situation has now taken extreme turns.  An 8-year-old Modern Orthodox girl was walking to school in the town of Bet Shemesh.  According to the Eda Haredit, her dress was immodest. (By any standard in the West, the dress of the Modern Orthodox is very modest).  One of the Eda Haredit confronted the girl and spat on her.   Thousands took to the streets to protest; both secular Jews and religious Jews.  While it is heartening to know that the Jewish populace deplores such behavior, that is not the end of this commentary.
While human rights violations against religious Jews are denounced, it seems that those against Messianic Jews are overlooked.  A Messianic businesswoman was run out of business due to complaints by Orthodox Jews.  When a Messianic Jewish congregation in Beersheva was broken into, vandalized and members pushed and mistreated, there was no protest in the streets. And finally, when a bomb disguised in a Jewish holiday gift basket exploded, nearly killing a young boy, the alleged bomber admitted he worked for an extreme anti-missionary organization.  And still, there were no protests in the streets.  This is not radical Islamic fanaticists against Israeli citizens.  This is Jew against Jew!
I guess what concerns me most is that this violence against Messianic Jews, as well as Christians, is carried out by their own countrymen.  Apparently, in Israel, there is a long and sad history between Christianity and the Jewish community, and it has resulted in Israeli Jews not caring about Christians or Messianic Jews even though they are full citizens, serve in the Army, pay taxes and are loyal to the State.  This is prejudice, pure and simple.
My young friends in Israel just want the freedom to worship as they choose.  Isn't that what we all want?  My fear is that the rising tensions between religious groups throughout the world (yes, even here in the U.S., where freedom to worship is guaranteed by the Constitution) is going to result in human rights violations.  In the U.S., we're already seeing the banning of religious icons and traditions  across our society.   Decapitated statues of Jesus (in Dorchester, Massachusetts last week), and the burning of Korans will only serve to inflame the hatred and mistrust that already exists.
It is my fervent wish that respect for each other and our individual beliefs would rule the day.  But like I said, I'm a Christian -- and I know my Bible.  The treatment of the Messianic Jews in their own country is like the proverbial "canary in the coal mine".... an early warning of danger.   Are we far behind?
Posted by Pam Kohler at 7:00 AM