Saturday Morning Commentary: Freedom Will Not Be Silenced

I had the privilege this last week of seeing a short interview with Cynthia Farahat, an Egyptian political activist and pretty savvy analyst, as well.  She appeared before the Human Rights Commission in the House of Representatives, and what she had to say to our honorable Congressmen was chilling.  A Coptic Christian, she gave this commentary on the state of her home country. 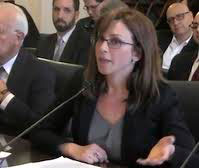 "In 1971, President Sadat introduced shariah law to the constitution and now, I think I'm qualified to say that Egypt is a constitutional theocracy, and it's not a modern state.  The consequences were that Copts are no longer, according to shariah law, identified or defined as citizens.  I have an Egyptian passport, but I'm not a citizen.  The concept of citizenship is a Western concept that does not apply to us in Egypt.  I'm a woman and I'm a Copt.  I'm a fourth-class citizen in Egypt.  A first-class citizen in Egypt is the Sunni male, Muslim male.  The second-class is the Sunni female.  The third-class is the Coptic male.  And fourth-class is the Coptic female.
And that's why none of the people that committed crimes (in the recent reprisals) against the Copts were prosecuted in any way.  Because it is against shariah law (and that's a fact; it's not an opinion) to persecute someone (a Muslim) for killing, raping, torturing, or vandalizing the property of a non-Muslim.  So this is our legal status.  And this has been happening under the Mubarak's so-called moderate regime, an ally of the West, and it's happening now.  It was only inevitable that they take their radicalism a step further and start killing Copts in the street in front of TV cameras with live ammunition and running them over with armored military vehicles they probably got from the United States of America." 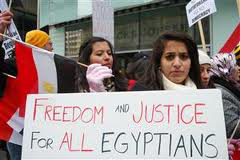 A brave young woman!  But what she had to say away from the halls of Congress made my heart hurt! She said that the Muslim Brotherhood is not what the Western media has portrayed them to be.  (No surprise there!) They are not interested in advancing democracy in her homeland, and there are millions of Egyptians who are waiting for the West to recognize the truth.  In the wake of the popular protests that brought about the collapse of the Mubarak regime, and were echoed throughout the Middle East as the "Arab Spring", Millions of Egyptian people looked to America as the beacon of freedom and the provider of hope.  But now, she states, they see America as lined up on the wrong side of the scales of independence and self-rule, and they don't understand why.  They waited for us to come to their aid, or at least make a statement on their behalf.  Understandably confused, they view our position as taking a side against the Egyptian people, who just long for a free society.
But lest you think this post is all doomsday, Cynthia still has hope.  She proudly announces that the average Egyptian Muslim citizen is not the problem.  They actually helped protect the Coptic Christians and Churches during the recent atrocities.  She fears for her safety for speaking out against the Egyptian State, and is unable to return to her homeland.  She  also fears for the future of religious freedom in Egypt.  But I'm praying that her final parting comments are accurate and foretelling:

"Even if the near future belongs to the enemies of freedom, something profound has changed among Egyptians; none of them will be the same again.  Freedom may look like a distant dream, but it is still closer than ever imagined prior to 2011."


Galatians 5:1    "It is for freedom that Christ has set us free.  Stand firm, then, and do not let yourselves be burdened again by a yoke of slavery."
Posted by Pam Kohler at 7:00 AM