Do Your Research on Agenda 21

It is so hard to keep up with all the assaults on our liberties; they are numerous and coming at us from all directions---from enemy and friend alike.  Yet it is easy to just think that there's nothing we can do about it, and impossible to understand what it all means.  But there is one issue that everyone needs to pay attention to and decide to take a stand.
I'm sure you've heard of the U.N. proposal called Agenda 21.  If you're like me, you instinctively felt suspicious.   Why is the U.N. involved in American law?  But if you're also like me, you didn't really know what the fuss was all about.  So let me explain. 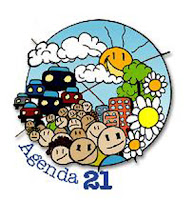 In 1992, the United Nations adopted Agenda 21 to "achieve a more efficient and equitable world economy," outlining a process to eliminate environmental decay and social injustice through micromanaging industries, communities, and culture.
In simple language, Agenda 21 attempts to abolish "unsustainable" environments.  I can you hear you asking now..... "Such as?"  And the answer would be, "Oh, you know, habitats that are upsetting the ecological balance by depleting natural resources, such as..... golf courses, grazing pastures on ranches and farms, and paved roads."
Now, we all want clean water and clean air, so what's the problem?  Well, let me give it to you straight.  Under the guise of world sustainability, the plan establishes a regime of rules that attempt to bypass Congress and the American people, handing over power over vast areas of the US economy to unelected U.N. bureaucrats.  Does that sound like anything we freedom-loving, believers-in-personal-liberty Americans would approve?  Of course not!  Unfortunately, we may not have anything to say about it! 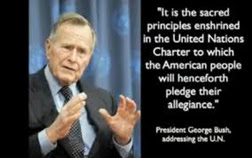 I'm sure it won't surprise anyone to find that George Soros has contributed millions towards promoting this project.   He loudly supports socialism and believes that global development must progress through eliminating national sovereignty and private property.  And he isn't the only one who supports this illegitimate proposal.  Other international agencies, the World Court, and even former Presidents are willing to give the U.N. power over sovereign citizens.
Agenda 21 would take away our individual rights as property owners and rob us of the liberty of owning land for personal use.  And I guess that the thing that bothers me most is the simplest of arguments: that the rest of the world feels as if they can tell American citizens what to do.  What happened to our self-determination and our self-government?  The United Nations is attempting to subvert the U.S. Constitution in a bold grab for power and the advancement of a one-world, globalist government.
If you didn't know about Agenda 21, you do now.  So we need to hold our elected representatives accountable and make sure they don't willingly hand over our sovereignty.  Call your Senator today and let him know that America is not for sale!

Daniel 7:27     "Then the sovereignty, power and greatness of all the kingdoms under heaven will be handed over to the holy people of the Most High.  His kingdom will be an everlasting kingdom, and all rulers will worship and obey him."