You may find it hard to believe, but I actually agree with something that the Occupy crowd has done.  And, no, I am not being delusional, nor have I suddenly developed a mental disorder.  Just hear me out!  I just watched a video on one of my favorite blogs, SHTF Plan, that made the hair on the back of my neck stand up. 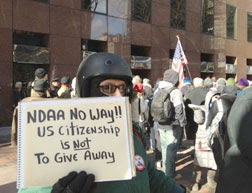 Recently, a group associated with the Occupy movement (the blue hair is a dead giveaway) held a peaceful protest against the unconstitutionality of our latest law that was furtively passed while we were preoccupied with celebrating Christmas and the holidays.   While expressing their First Amendment right to Free Speech, they asked "Is this the America you want to live in?" and challenged the passage of the 2012 National Defense Authorization Act.
In case you've been on Mars the last month, let me help you understand just what this law does.  According to writer E.D. Kain, a contributor on Forbes.com, the NDAA "greatly expands the power and scope of the Federal Government to fight the War on Terror, including codifying into law the indefinite detention of terrorism suspects without trial.  Under the new law the US Military has the power to carry out domestic anti-terrorism operations on US soil."  Just what does that mean?
First of all, to me, it seems like the Patriot Act on steroids.  Secondly, the fact that the ACLU, on its' blog site, stated that "The ACLU believes that any military detention of American citizens or others within the United States is unconstitutional and illegal" should give all Americans, regardless of party or ideology, great pause.  As if that isn't enough, let me telescope in on a couple of the Sections of the law:
Section 1021 asserts the President's authority to arrest suspected (not convicted) terrorists and gives him the option to choose whether or not they even get a trial, and if so, what kind of trial.  It "includes any person who has committed a belligerent act or has directly supported such hostilities in aid of such enemy forces."  Isn't it logical to ask, "Who is any person?";  "What is a belligerent act?";  "What is direct support?"  It's scary enough that any DA or jury or judge could define these terms according to their own purposes, BUT YOU MAY NEVER GET A COURT HEARING!  And never mind that this law is in opposition to the 4th, 5th, 6th and 8th Amendments of the Constitution. 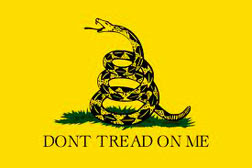 Section 1022 requires that a certain class of terrorist get no trial.  Instead they must be held in military prisons, for as long as this President, or any future President decides.    After a firestorm of public disapproval, a so-called exemption was added to the law, which reads "The REQUIREMENT to detain a person in military custody under this section does not extend to citizens of the United States. "  That just means that military custody, without a trial, is mandated by law, but the President, at his discretion, can waive this stipulation.  It just doesn't seem like we, the citizens of the United States, are adequately protected.
If this law is so poorly defined, what is to keep us from sliding down the slippery slope of losing more Constitutional rights?  The writing is on the wall when Senator Rand Paul can ask the bill cosponsor, Senator John McCain, "....under the provisions, would it be possible that an American citizen could be declared 'an enemy combatant', and sent to Guantanamo Bay, and detained indefinitely?", and Senator McCain responds, "I think that as long as THAT INDIVIDUAL, NO MATTER WHO THEY ARE, if they POSE A THREAT to the security of the United States of America, should not be allowed to continue the threat."(Emphasis added).
So in response to the Occupy protestors, NO, this is not the America I want to live in!  The Supreme Court is our last chance, and unfortunately, we're on shaky ground there, too.  It's time to start praying!


"Whenever the people are well informed, they can be trusted with their own government; that whenever things get so far wrong as to attract their notice, they may be relied on to set them to rights."     Thomas Jefferson, 1789


Galations 5:1    "It is for freedom that Christ set us free.  Stand firm, then, and do not let yourselves be burdened again by a yoke of slavery."
Posted by Pam Kohler at 7:00 AM