Saturday Commentary: When Will They Ever Learn?

Over the holidays, the people of America got fleeced again.  Did you hear about it?  Probably not.  I invite you to read a very comprehensive article on one of my favorite blogs, theeconomiccollapseblog.com.  Here is a pullout from the article:


"The Federal Reserve, the European Central Bank, the Bank of England, the Bank of Canada, the Bank of Japan, and the Swiss National Bank have announced a coordinated plan to provide liquidity support to the global financial system.  According to the plan, the Federal Reserve is going to substantially reduce the interest rate it charges the European Central bank to borrow dollars.  In turn, that will allow the ECB to lend dollars to European banks at a much cheaper rate.  The hope is that this will alleviate the credit crunch which has gripped the European financial system by the throat. So where is the Federal Reserve going to get all these dollars that it will be loaning out at very low interest rates?  You guessed it --- the Fed is going to create it out of thin air.  Our currency is being debased so Europe can be helped out." 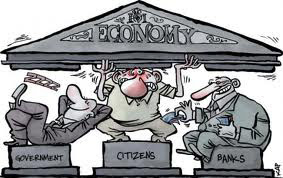 "Bailed out" is more accurate.  Here's how it works:  The Fed disguises it's machinations by explaining it as a "temporary liquidity swap arrangment" with the European Central Bank.  What that means is the Fed trades or "swaps" dollars for euros at an unprecedented interest rate of 1/2 of 1%!  Let me repeat that --- one-half of one percent! The ECB guarantees to return the dollars at an exchange rate fixed at the time of the swap.  Some reports are stating that the latest swap by the Fed was over $60 Billion!   I don't know about you, but if everything was as good as the Powers That Be want us to believe; and as our Markets and the Dow Jones are trying to convince us, then all this would be unnecessary, right?  I feel like we're watching the old Rocky and Bullwinkle cartoon....."Watch me pull a rabbit out of my hat!"  WHEN WILL THE AMERICAN PEOPLE WAKE UP?  Bottom line is this:  our currency continues to be debased!
So when these last ditch efforts fail, and we are dragged down with the European economy, how long before it's decided that it's necessary to scrap the whole system, and develop the one world government and one world currency?  You thought 2011 was a rocky ride?  Just wait --- 2012 just got it's motor started!

Proverbs 29:4    "By justice a king gives a country stability but those who are greedy for bribes tear it down."