The Dreaded "R" Word Is No Longer Ours Alone

That's right, we must now share that alarming period of economic decline known as "recession" with several European countries.  And I fear that the headlines will soon proceed from "European recession"   to "Global recession".  Europe's economy is slowing down as evidenced by S&P's projected downgrading of the credit ratings for Italy, Spain, Portugal, France and Austria.
Following right behind that encouraging news is the report that the Bank of Japan says their economy has experienced a significant "pause".  And to top that off, China's annual growth rate of 10% over the last couple of decades has slowed to a meager 1.5% in the second and third quarters of 2011.  That has led leading analysts in the UK to predict an economic climax in that country in 2012. 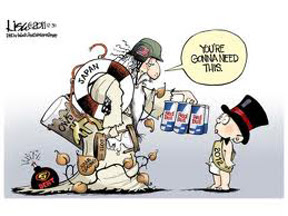 The scariest thing to me is that the major countries of the world all have extraordinary amounts of debt that must be refinanced in this coming year.  For example, China must refinance $121 Billion, while France and Italy need to refinance $367 Billion and $428 Billion, respectively.  And us?  We have over $2,783 Billion that must be financed again, hopefully at a lower interest rate!  Yeah, right!  Credit is  SOOO easy to come by these days!
All this exciting news follows the announcement that the U.S. jobless claims last week had hit a six-week high, while Hostess Brands filed for bankruptcy protection and over 100 Sears and Kmart stores will be closing.
Folks, I hate to be the bearer of bad news.  But it looks as if our national nightmare is long from over.  We have begun a new year, but it's the same ol' dismal economic news.  So, tighten your belt a little tighter.  While "the powers that be" tout a resurgence in our economy, and fill our heads with hope that things are getting better, we can use this period of calm and do what we've been doing for the last few years..... circle the wagons, prepare for what we hope and pray isn't coming, and learn how to provide for ourselves.  As the venerated Jim Rawles advocates.....Beans, Bullets and Bandaids.  2012 has just begin and I think we better get ready for a bumpy ride!
Posted by Pam Kohler at 7:00 AM