When faced with the scary reality of this earthly realm, it's easy to forget that it is only temporary.  We can do all the preparing and storing up we're capable of, and we overlook our bigger purpose in life.  So today, I want to share the remarkable story of how a young friend of mine helped me to refocus on what I need to do to prepare for eternity.

Ben Breedlove left this earth on Christmas night, and he received the greatest gift of all.  He stood in the presence of his Lord and Savior  and felt the peace that surpasses all understanding.
How do I know that?  Because in the midst of our grieving in that cold hospital room, his sister revealed what Ben had shared with her.  Several weeks prior to his death, Ben had suffered a heart attack associated with Hypertrophic Cardiomyopathy, a condition he had suffered with his whole life.  But during that attack he experienced a "dream" or "vision" of being someplace he did not want to leave.  He said he saw himself in a mirror, his whole life before him, and he was pleased with what he saw.  And he could not stop smiling!  He said it was the BEST feeling, and he was ready and excited for a really big event.....and then he woke up.  He wanted to return to that peaceful and joyful place.  He told his family he was not afraid of dying anymore, and he wanted them to know that he was happy in that place.
And then on Christmas night, he was able to return there for good.  But Ben wasn't done sharing his message of peace and hope.  At 1:00 am in the morning, his sister, Ally, discovered a video Ben had left behind;  something he wanted the world to know. 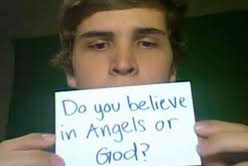 Ally posted the videos, titled "This Is My Story (Part 1) and (Part 2)", and Ben accomplished his mission.  In less than 48 hours, the video was seen by over 220,000 people all over the U.S., and as far away as England and Australia. (UPDATE: As of Christmas Day, 2017, Ben's videos have now been seen by over 9.2 million people!)  Major online news outlets picked up the story and it is still spreading like wildfire.  Ben was a genius at using YouTube to reach and influence his peers, and I have to admit, the older generation could use some reminding, too.
Ben left a lasting impression and legacy far beyond his 18 years.  It was a privilege to know and love Ben.  He always brought a smile to my face, and a warm hug.  And he taught me one last thing before he went to receive his rewards in heaven (and there will be many)---there's more than one way to prepare, and we should go about it diligently.
Today, I will be attending Ben's funeral, and giving thanks for the impact he is making on this Internet Generation.  The church is expected to be filled with young people; all touched by the tender and heartfelt message Ben left them.  It is a message we all need to hear.  I celebrate your life, Ben, and mine will never be the same.