Gates and Paths; Narrow and Wide 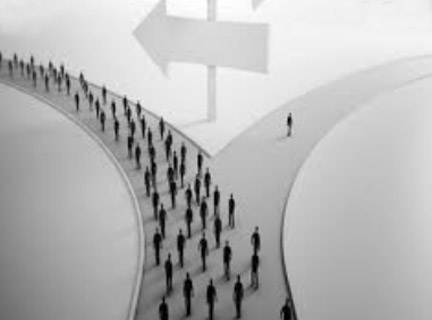 Earlier in the week, I took part in a discussion on the portions of the Human Spirit, and at one point, the conversation centered on the narrow gate and wide gate mentioned in Matthew 7:13-14. The seventh Chapter of Matthew is full of nuggets to live by, according to God's moral and legal standards. And we, in the 21st Century Western Church often forget those characteristics of our Father in Heaven. We don't like to think of God as legalistic. We will say we are under His Grace and Mercy and no longer under the Law. But we forget that He is a legalist. He sets standards, guidelines, and codes of honor, morals, principles and ethics to live by. There are requirements to being considered righteous, and it's not a sliding scale!

I would also venture to say that, from our modern perspective, we tend to see those that enter the wide gate as non-Believers. It's just taken for granted that we, who are Saved, are those referred to as entering the narrow gate on the way to everlasting life. If you believe in Jesus, then you are perceived as automatically going through the narrow gate. Have you ever thought that? I know that's how I interpreted it for years. I think this avenue of thought comes from our lack of understanding about the significance of "gates".

In the Old Testament a gate [like today] was an entry point into an enclosed area; a door or opening. But unlike today, gates were the place where local courts convened, and justice was executed. Similarly, the New Testament asserts that gates stood for those who held government and administered justice there. And metaphorically speaking, according to Matthew 7:13-14, God has placed gates at the entrances of the ways [paths] that lead to either life or destruction; heaven or hell. A gate can be as thin as a curtain, such as in Matthew 27:51 when the veil in the Temple is torn at Jesus's Resurrection. It opened the way for man to once again have access to God. Or a gate can be synonymous with great power, as in Matthew 16:18 when Jesus refers to the "gates of Hades"; the power of death. So, you can see that the narrow gate has great significance and whether you enter into it or not, has great consequences.

Soooo... what if it's not as simple as all those destined to go to Heaven will go through the narrow gate, and all those going to Hell will seek the path to the wide gate? I agree that this particular scenario is absolutely relevant. But note that Scripture says the path to the narrow gate is difficult to travel, while the path to destruction and death is broad and easy to travel. Could it be that a choice between both paths could be possible for Christians? Here's why I ask that question ...

We know it is the desire of God's heart that all men be Saved. But, in His Sovereignty, He gave us Free will; we have to make a choice -- accept Him or reject Him. There is no middle ground. On top of that, we must accept ALL of Him! Again, there is no middle ground -- there is no area of His righteousness in which He is willing to compromise. He will never relax the rules of His moral law. Yet, look at the state of the Church and Body of Christ today. We have compromised with the world and accepted no-contest divorce, and gay marriage (even in our church leaders)! We have stood by and watched abortion, transgenderism, lawlessness in the streets, and the righteousness of our God mocked across our land. It has been a difficult path to walk in this culture and nation for a Christian! Satan has made sure the path has been wide and easy to travel for us. "Just stay silent; don't rock the boat," he whispers. "Did you see the loss of business that Christian baker suffered when he held to God's principles and refused to cater a gay wedding? It's okay to go to Church on Sunday and pray for the baker. You don't have to really stand up and proclaim God's Truth! He understands how difficult that would be for you and the trouble it would cause you. That's right, just keep praying that He do something about it!"

You see, Satan has been witness to the power and the authority in the Believer, and if he can convince us to stay silent or inactive in the Word, then he knows that he's got the edge in this spiritual battle on earth and in the heavens. We can no longer afford to say we love the Lord, yet remain rebellious towards His Word. That makes us a liar according to John 14:23-24, If anyone [really] loves Me, he will keep [obey] My word. That doesn't mean just the commandments that are easy to follow, or that we like and agree with. It means even those hard statutes and moral laws that make us unpopular with just about everyone in our compromised culture. James 4:4 makes it pretty clear that friendship with the world makes us an enemy of God. So how many Christians today will find themselves caught up in the surge of people being shoved down that broad path to the wide gate because they didn't anchor themselves on that difficult path to the narrow gate; they allowed themselves to make concessions to please the world and chose to take the easy route than to persevere on the road towards holiness?

I'm not saying the path to the narrow gate will be a breeze. Your faith will be tested, and you will be persecuted. Just get that in your head now! But that narrow path is the only way to access the Father and His Kingdom! And it's going to cost us. We won't be able to arrive at that narrow gate by "pretending" to act like a Christian. Jesus makes that clear in Matthew 7:21-23. Although followers prophesied in His Name and cast out demons in His Name, Jesus told them He didn't know them! What if that narrow path is found within the boundaries of the wide path? Would it be possible to think you're on the right path to the narrow gate, while being seduced by the culture of to embrace the wide path that is all around you? I see it all the time .... professed Christians who embezzle money; self-proclaimed Believers who are still steeped in the iniquities of their family bloodlines; and people who I know love Jesus, but are lying to their spouses about secret addictions.

It is hard to be holy! And speaking for myself, I have to rely on Jesus for every ounce of righteousness I possess! But Father is strict about entrance into that narrow gate! That gate is the doorway into His sanctified Kingdom in Heaven. Jesus tells us in John 3:1-5 that Salvation is the first necessary step to get into that narrow gate. We can't see or perceive the Kingdom without being Saved; and we certainly can't enter the narrow gate into the Kingdom unless we're Saved. But everyone and everything in the Kingdom of God in Heaven is up to His standards. I believe that Salvation alone does not guarantee that much-desired entrance. Jesus wants to see a changed life! He wants to see evidence that you are seeking the Kingdom first [having a heart that has been circumcised and cleansed] and also seeking righteousness! We can't play at being a Christian, while continuing in our sin. His blood was too costly to be sold at a reduced rate. So take some time and contemplate where you are on your path. Are you focused on staying on the narrow, more difficult path -- or are you prone to wander out into the masses who are on the more easily traveled wide path? The Body of Christ needs to become convicted of the importance of entering the right gate ... the narrow gate that leads to eternal life in the Kingdom of God in Heaven. Anything less could lead to an unwanted and unplanned detour. It might make your journey more comfortable in the short run, but will it be worth sacrificing your eternity with Jesus?

Isaiah 35:8     A highway will be there, and a roadway; And it will be called the Holy Way. The unclean will not travel on it, but it will be for those who walk on the way [the redeemed]; And fools will not wander on it.