Do You Still Doubt The Global Caliphate?

You know, I look back over my thoughts of the last year-and-a-half that I've been writing this blog and the issues that I've felt were important to share, and it is amazing how far we've come in our national "transformation".
Blog posts on food storage, firearms training, and threats to our Constitution seem "old hat" now.  If you haven't sought information on these topics yet, then you are waaay behind the curve.  Because, in case you haven't noticed, the intent to change our American way of life has come out of the shadows and it is much more "in your face".  Whether it is the hijacking of our education system through the Common Core Standards, the intimidation by the IRS of anyone who doesn't agree with the Party in power, or the metamorphosis of our law enforcement system into using military-style tactics --- it's all designed to change the very foundation of this country.  And this realization leads me to a news item that I found not only disturbing, but quite alarming. 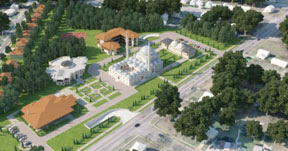 Isaiah 1:7     "Your country lies desolate; your cities have been incinerated. Before your very eyes, foreigners are devouring your land— they've brought devastation on it, while the land is overthrown by foreigners."